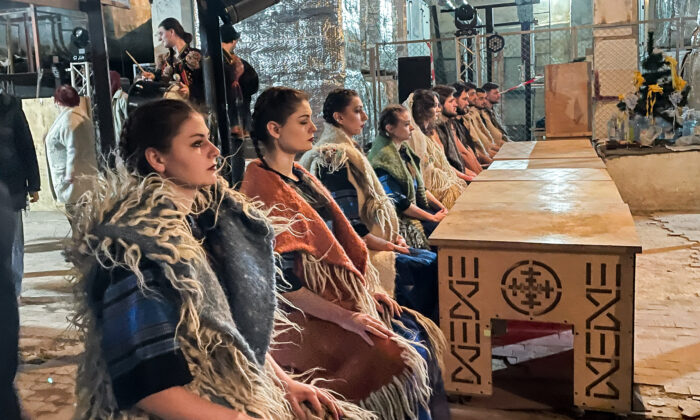 Actors prepare for the opening scene of a musical performed in a bunker in Ivano-Frankivsk, Ukraine, on March 20, 2022. (Charlotte Cuthbertson/The Epoch Times)
Russia-Ukraine War

Ukrainian Theater Lives On, in a Bunker

IVANO-FRANKIVSK, Ukraine—A crowd of guests from an adjacent hotel filed into the bomb shelter in the cavernous basement of the Ivano-Frankivsk Regional Academic Ukrainian Musical Drama Theater on March 20.

The crowd filled up the dimly lit space, sitting on the makeshift tiered benches in the back. The fogging machines, theatrical lighting rigs, and sound equipment were barely discernible from the bunker’s piping, ductwork, and wiring.

In the early afternoon the day before, someone flipped off the bomb shelter’s original lights, and a mix of stagehands and actors crisscrossed the darkened space to add spotlights, the laser stage light, and the fogger. Young men and women in costumes from another era emerged from the darkness and disappeared again in a chaotic rush to set the stage and transform the shelter space into a theater.

At the foot of a steep industrial staircase that drops some 20 feet into the shelter from the theater’s basement, a symphony orchestra and a handful of vocalists waited in silence on March 20. Their chairs were arranged under the towering mass of an industrial air duct. A broken, decommissioned, two-story-tall section of the duct, likely too large to remove, lay behind a row of violists.

Though the front lines of the war were hundreds of miles away, a Russian missile struck the Ivano-Frankivsk airport during the first days of the invasion and another aerial attack hit an arms depot days prior to the performance on March 20.

The theater, Ivano-Frankivsk’s largest performing arts venue, shut its doors on Feb. 24, the day of Russia’s invasion of Ukraine. The venue’s basement became a hub for humanitarian supplies, and the space beneath it a bomb shelter. Later, artists and volunteers helped transform the space into a makeshift performance venue. The first performance in the bomb shelter, titled “Eneida,” played on March 7. “The Nation” played on March 16, followed by “Romeo and Juliet” on March 18.

On March 20, the bomb shelter was the venue for a musical based on Gutsulka Ksenia, a Ukrainian folk song.

“The dark night covered the mountains and submerged the plain, and amidst it, a pure white figure emerged,” says the first couplet of the song, performed by the theater’s lead actor.

The audience members were a mix of refugees and locals, according to the producer of the performance, Ivano-Frankivsk Theater Director Rostislav Derzhypilskyy.

“It’s going to be symbolic to perform this play here in the bomb shelter and we’re doing this to give us momentum to push ourselves to the top as a much stronger nation,” Derzhypilskyy told The Epoch Times.

Roman Grygoriv, a composer of several contemporary Ukrainian operas, was in the audience on March 20. Grygoriv, who has a wife and small children, fled Kyiv shortly after Russia invaded Ukraine. The family, joined by Grygoriv’s co-composer Illia Razumeiko, packed into a car and spent 22 hours on the road to Ivano-Frankivsk.

Grygoriv, the art director of the National Presidential Orchestra of Ukraine, was born in Ivano-Frankivsk and has an apartment in the city and a house in the village nearby. He gave both places up to refugees and now sleeps in a barebones room at the theater. Grygoriv’s wife and children have fled to Ireland.

“We’re not composers now. We’re just people training for the army,” Grygoriv told The Epoch Times. “Our country is going through an unprecedented tragedy.”

Though three weeks have passed since the war began, Razumeiko said he was still too shaken to compose or play an instrument. Composing music about the war as it happens would be “fake art,” he told The Epoch Times.

“It’s impossible to play, to express some aesthetic at this time,” Razumeiko said. “Your body cannot do it. OK, you can play mechanically on the piano. But you can’t sing, because it’s physically impossible to do.”

Razumeiko and Grygoriv were scheduled to perform one of their compositions on March 20 at the Kaufman Music Center in New York City. The two composers are now unable to leave the country due to a decree which prohibits men of fighting age from leaving Ukraine. Instead of playing the scheduled piece, the music center in New York played a portion of a marathon seven-hour improvisational performance Razumeiko and Grygoriv livestreamed upon arriving in Ivano-Frankivsk. The performance is largely noise and clatter, an intentional choice to portray the chaos and destruction of war.

The title of the piece is “Mariupol,” the name of an eastern Ukrainian port city that’s now encircled by Russian forces. The city’s residential zones suffered some of the worst damage in the war to date. The city is a key target for the Russian military because it’s home to the Azov Battalion, a controversial military unit that receives official recognition and armaments from Ukraine’s Ministry of Defense. The U.S. Congress prohibited any U.S. support of Azov in 2018 because the group accepted members with explicit neo-Nazi views.

Film director Oles Sanin, standing beside rows of cement beds resting on shockproof springs, told The Epoch Times he’s doing his part as a creator to promote Ukrainian culture in a time of war. Part of his crew is planning to join the volunteer territorial defense forces once his latest film is completed.

“The movie screen is likewise our national territory. We’re also fighting on this territory,” Sanin said.

Oleksiy Gnatkovskiy, the lead actor of the theater, also sees his work as contributing to the war.

“Everyone has their weapons. The soldiers have their weapons. Our weapon is art,” Gnatkovskiy told The Epoch Times. “We’re supposed to defend our country in many ways. We help keep our people coolheaded, help relieve their stress.”