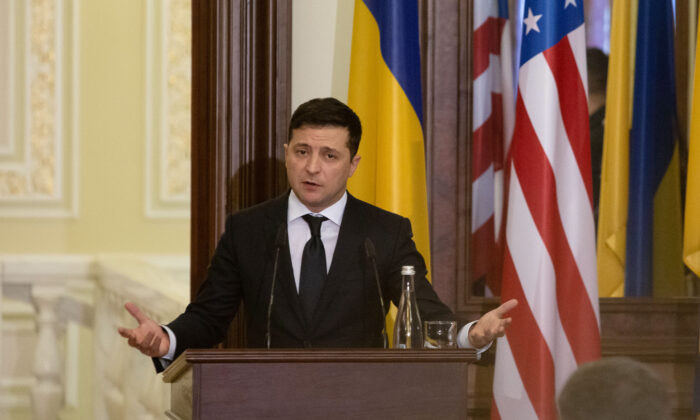 Kyiv, Russian-backed separatists blame each other
By Ella Kietlinska

One Ukrainian soldier was killed and four others were injured on Feb. 18 when heavy fighting erupted in eastern Ukraine, the country’s military said, as it and Russian-backed separatists blamed each other for the flare-up.

The separatist armed groups opened fire on the positions of two Ukrainian mechanized brigades, according to Ruslan Khomchak, chief of the general staff of the Armed Forces of Ukraine.

“The enemy also used 152 mm artillery systems, prohibited by the Minsk agreements,” he said in a briefing on Feb. 18.

Khomchak said that separatist armed forces “attempted to attack the observation posts at the positions” of both Ukrainian brigades, but the Ukrainian troops warded off the attack. The fight continued until the separatists requested a ceasefire later the same day, the shooting stopped, and the situation became stable, Khomchak said.

However, a representative of the separatists, Yakov Osadchy, accused Ukrainian soldiers of provoking the fight, saying they entered the territory controlled by the separatist forces but encountered a minefield, according to Radio Free Europe (RFE). Osadchy also said that four separatist fighters were killed and four were wounded by the Ukrainian military in the clashes, reported RFE.

The violence was some of the worst since a Paris summit in December tried to narrow positions between Kyiv and the separatists on implementing a peace deal, and it comes ahead of a possible second summit on the same issue in Berlin. The fighting erupted the day after the fifth anniversary of the U.N. Security Council’s endorsement of the 2015 Minsk agreements aimed to bring peace to the regions of Donetsk and Luhansk, which are controlled by pro-Russian separatists, and commonly known as Donbas.

Ukrainian President Volodymyr Zelensky said he would convene a national security council meeting to discuss the latest flare-up in the Donbas region.

“This is not just a cynical provocation … it is an attempt to disrupt the peace process in Donbas, which had begun to move through small but continuous steps,” Zelensky said in a statement.

“Our course toward the end of the war and our commitment to international agreements remain unchanged—as does our determination to repel any manifestation of armed aggression against Ukraine,” Zelensky said in a statement.

The secretary of Ukraine’s National Security and Defense Council, Oleksiy Danilov, said at a briefing that armed provocation on the collision line in Donbas was carried out by forces not interested in the continuation of the peace process in Normandy format.

Zelensky and Russia’s President Vladimir Putin had a phone conversation on Feb. 14 “on implementation of the agreements reached during the Normandy summit in on Dec. 9, 2019, in Paris, as well as the preparations for the next meeting of the ‘Normandy four’ leadership,” according to a statement on the Ukrainian president’s website.

The Normandy group consists of Ukraine, Russia, Germany, and France, which convened to end the war in the Donbas region.

The leaders have affirmed their commitment to the full implementation of both Minsk agreements signed in 2014 and 2015.

The Minsk agreements are two ceasefire accords. The first one, negotiated in 2014 between Ukraine and Russia and the two separatist regions, failed shortly after its implementation. The Normandy group reached a second ceasefire agreement in 2015.

The United States condemned the aggression.

“The United States stands with its partners and allies in condemning Russia’s latest aggression against Ukraine. We support President Zelensky’s commitment to peace and call on Russia to immediately implement the ceasefire it signed on to in the Minsk agreements,” wrote State Department spokesperson Morgan Ortagus on Twitter.

The United States stands with its partners and allies in condemning Russia’s latest aggression against Ukraine. We support President @ZelenskyyUA’s commitment to peace and call on Russia to immediately implement the ceasefire it signed on to in the Minsk agreements. https://t.co/HpT3RzqpE4

Ukraine, Western countries, and NATO accuse Russia of sending troops and heavy weapons to prop up separatist fighters in Donbas, a charge that Moscow has denied.

Zelensky came to power last year promising to end the conflict. Since then, Ukraine and Russia have implemented some confidence-building measures, including prisoner swaps and phased troop withdrawals in designated areas.

The conflict between Ukrainian forces and Russian-backed forces has already seen more than 13,000 people killed since 2014.

The decree was issued a week after the Kremlin said a senior Ukrainian-born Russian official, Dmitry Kozak, was now in charge of managing Moscow’s relations with Ukraine.