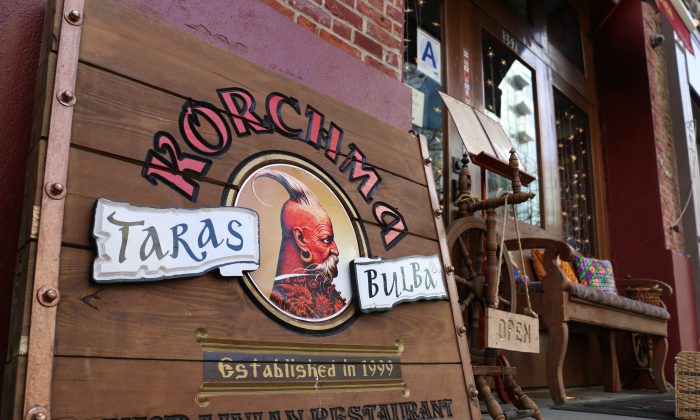 NEW YORK—Six time zones from Ukraine, Korchma Taras Bulba, a Ukrainian restaurant in SoHo, stays abreast of events in its home country by keeping in close contact with its sister restaurant in Kyiv.

The Kyiv restaurant is just 300 feet away from what turned into the heart of the recent national protests. Instead of closing up shop as some restaurants in the area did, Taras Bulba stayed open to provide free food and Wi-Fi to journalists.

But it did not stop there. Taras Bulba staff also took to the streets to pass out free food to both sides of the conflict. “Korchma Taras Bulba restaurant is not a political organization,” explained Ana Tekunova, the manager for Taras Bulba in New York. “We do not support either of the political parties but we are still striving for the peace and prosperity of Ukrainians.”

Yuri Beloyvan, the Ukrainian owner of Taras Bulba restaurants in Moscow, Kyiv, and New York, believes that Ukraine should be independent from both Russia and the European Union (EU). “He personally believes that Ukraine might have avoided this protest if it went its own way without being involved in the European Union, without involving all this with Russia, like staying neutral,” said Tekunova.

Half a world away it is business as usual in Taras Bulba’s New York location. The only visible sign of the turbulence in Ukraine is a jar on the bar with a sign next to it reading, “Your donation will be much appreciated by the victims of Kiev, Ukraine.”

While Tekunova said their Kyiv restaurant was not damaged physically or financially during the protests, she said donations will go toward the cost of supplying free food, which they are continuing to hand out.

This act of generosity might be better understood in the context of Ukrainian history. Taras Bulba is a famous literary hero in Ukraine who stands for national sovereignty and freedom. Korchma Taras Bulba means the “Restaurant of Taras Bulba.”

“He is more like the powerful man who would stand up for his people and who could protect their rights,” explained Tekunova. “He is respected and honored by all Ukrainians.”

As of December, Ukraine’s debt had reached $14 billion, or 77 percent of its Gross Domestic Product (GDP). Former President Viktor Yanukovych sought $15 billion in bonds from Russia to pay off its debts before he was ousted in February. Now the interim government is in talks with the IMF to borrow $14 billion, which will likely come with strings attached, something Yanukovych was trying to avoid when he turned down a deal with the EU.

After Yanukovych turned down that trade deal with the EU in favor of closer ties to Russia, the country erupted in protests, the most violent of which took place in the capital, Kyiv.