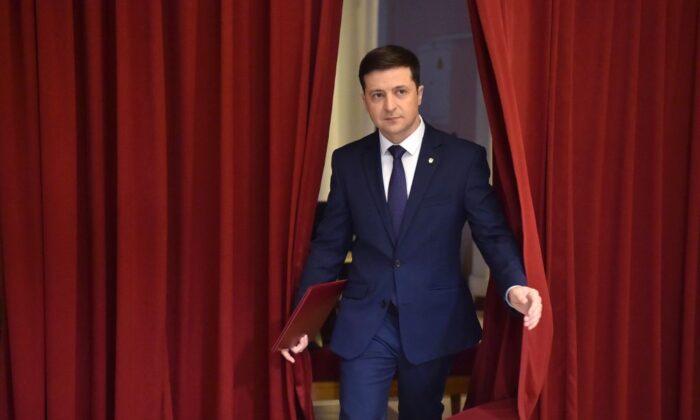 Ukrainian comic actor and the presidential candidate Volodymyr Zelensky enters a hall to take part in the shooting of the television series "Servant of the People" in Kyiv, Ukraine, on March 6, 2019. (Sergei Supinsky/AFP via Getty Images)
International

Zelensky’s TV series ‘Servant of the People’ become an international hit, even in China
By Kane Zhang

Broadcasters worldwide are vying for the rights to the comedy TV series that brought Ukrainian President Volodymyr Zelensky to fame.

The comedy series “Servant of the People,” starring Zelensky, has become increasingly popular since the Russia-Ukraine conflict, with more than 20 broadcasters worldwide vying for the rights to the show. People in China are finding ways to get around the firewall to stream or pirate the show.

The television series was first aired in 2015 in Ukraine. In the series, Zelensky played a high school history teacher who became president after a student’s video of him ranting about the corruption in Ukraine went viral.

If Zelensky’s rise to his real-life presidency sounds like a plot from the TV show—it most definitely is.

In real life, following the success of the comedy series, Zelensky won the country’s presidential election in 2019 with a landslide victory, receiving 73 percent of votes. He promised to fight corruption and bring peace to eastern Ukraine.

“It’s been very, very busy,” said Nicola Söderlund, the co-founder of Eccho Rights, the agency that holds the right to Zelensky’s TV sitcom. “All around the world, people have asked for the rights because they want to broadcast it.”

According to The Local, a European digital newspaper, since the start of Russia’s invasion of Ukraine, broadcasters such as Britain’s Channel 4, Greece’s ANT1, and Romania’s PRO TV have rushed to join those who have already snapped up the rights to “Servant of the People.”

In China, people are finding ways to bypass the country’s “Great Firewall” to either stream or pirate the show. The Great Firewall is internet censorship imposed by the Chinese regime intending to block people in China from accessing selected foreign websites and slowing down cross-border internet traffic.

“Zelensky should be nominated for Best Actor at this year’s Academy Awards,” a netizen commented on Chinese social media.

“After watching the [show], it reminds me that the government should serve its people … not the other way around,” another platform user nicknamed “Maple Leaf” commented.

However, these comments were soon deleted from the Chinese social platforms.

Current events commentator Lu Yao told The Epoch Times that people in China “yearn for freedom and democracy.” Thus they are finding ways to bypass the firewall set in place by the Chinese Communist Party (CCP).

“China could use a leader like Zelensky who is willing to take on corrupt officials and let the people be free,” Lu added.

Zelensky was an actor and comedian who became the president of Ukraine without any political experience. His wife, First Lady of Ukraine Olena Zelenska was one of the show’s screenwriters.