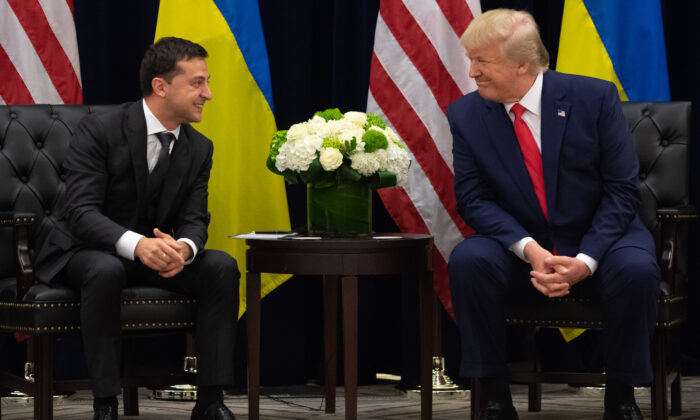 'Look, I never talked to the president from the position of a quid pro quo'
By Jack Phillips

Ukrainian President Volodymyr Zelensky again denied a primary allegation leveled by House Democrats amid their impeachment inquiry into President Donald Trump, saying there was no discussion of a quid pro quo.

Zelensky is one of the central figures in the Democrat-led inquiry, having spoken to Trump in a July 25 phone call about investigations into former Vice President Joe Biden, his son Hunter Biden, and Burisma Holdings, the Ukrainian energy company that hired the younger Biden as a board member while the former vice president was in office.

“Look, I never talked to the president from the position of a quid pro quo. That’s not my thing,” Zelensky told several news outlets over the weekend, including Time magazine. He said he doesn’t “understand at all” the allegations made against Trump during the House Intelligence Committee’s hearings.

Breaking News: The President of Ukraine has just again announced that President Trump has done nothing wrong with respect to Ukraine and our interactions or calls. If the Radical Left Democrats were sane, which they are not, it would be case over!

Trump on Twitter wrote that his Ukrainian counterpart said he “has done nothing wrong with respect to Ukraine and our interactions or calls,” adding, “If the Radical Left Democrats were sane, which they are not, it would be case over!”

Zelensky was critical of the United States’ move to hold for review hundreds of millions of dollars to Kyiv earlier this year before it was released.

“I don’t want us to look like beggars. But you have to understand. We’re at war,” he said. “If you’re our strategic partner, then you can’t go blocking anything for us. I think that’s just about fairness. It’s not about a quid pro quo. It just goes without saying.”

Democrats’ case against Trump—that he withheld military aid to pressure Ukraine for investigations into the Bidens before the 2020 election—have been shot down by other Ukrainian officials, including Foreign Minister Vadym Prystaiko. Trump and other White House officials have also dismissed the allegations, saying they’re tantamount to a Democrat-led witch hunt.

In the interview, Zelensky also attempted to push back against allegations that Ukraine is a corrupt country.

“It might seem like an easy thing to say, that combination of words: Ukraine is a corrupt country. Just to say it and that’s it. But it doesn’t end there. Everyone hears that signal. Investments, banks, stakeholders, companies, American, European, companies that have international capital in Ukraine, it’s a signal to them that says, ‘Be careful, don’t invest.’ Or, ‘Get out of there,’” he said.

Transparency International, an anti-corruption NGO, and other organizations have frequently ranked Ukraine as among the most corrupt nations in Europe. Last year, Ukraine’s new top prosecutor, Ruslan Ryaboshapka, announced he would widen a probe against Burisma founder Mykola Zlochevsky for the suspected “theft of government funds on an especially large scale,” Reuters reported.

According to reports, Zlochevsky’s whereabouts are currently unknown to Ukrainian authorities.

In late September, after the impeachment inquiry was announced by House Speaker Nancy Pelosi (D-Calif.), Zelensky said he didn’t feel pressured by Trump during the phone call.

“I don’t want to be involved to democratic open elections of USA [sic],” Zelensky said at the time. “You heard that we had good phone call. It was normal. We spoke about many things. I think, and you read it, and nobody pushed me.”

Biden boasted in a video last year that he pressured then-Ukrainian President Petro Poroshenko in 2016 into firing the prosecutor, Viktor Shokin, who was probing Burisma. Biden’s son Hunter Biden was on the board of Burisma from 2014 through 2019. Obama officials and Biden have described Shokin as a corrupt official.