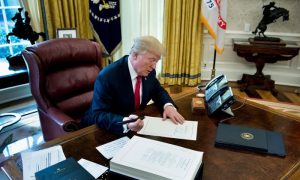 'I never feel any pressure'
By Jack Phillips

“I have never met Rudy Giuliani. Never. And never had any phone calls with him,” Ukrainian President Volodymyr Zelensky said in Kyiv, reported Bloomberg News.

Speaking to the press, Zelensky said he wasn’t under pressure from Trump to investigate former Vice President Joe Biden after a call between the two leaders surfaced.

“I want to tell you that I never feel any pressure and there are very many people in the West and in Ukraine who would like to influence me,” Zelensky said on Oct. 1, according to the Bloomberg report. “But I am a president of independent Ukraine, and I think that, and I hope my steps demonstrate this, that it is impossible to influence me.”

A transcript released by the White House last week showed Trump speaking with his counterpart about looking into Biden and his son, Hunter.

Zelensky also noted that the White House’s transcript is similar to the Ukrainian version.

“This is the same text. I spoke Ukrainian, and President Trump, unfortunately, did not speak Ukrainian, he spoke English,” Zelensky told reporters.

House Democrats have seized on the phone call, alleging that it amounts to seeking foreign help to interfere in the 2020 election, as Biden is a potential political rival. Last week, House Speaker Nancy Pelosi (D-Calif.) announced that an inquiry into impeachment is moving forward.

A transcript of the phone call (pdf) released last week showed that Zelensky said that he hoped “very much that Mr. Giuliani will be able to travel to Ukraine and we will meet once he comes to Ukraine.”

Trump also told Zelensky during the call that he would have Giuliani speak to him via phone, the transcript said. According to Zelensky, he never talked to him on the phone.

Earlier on Tuesday, Trump said that “almost everything” the person who filed the complaint against him about the phone call is wrong.

“So if the so-called ‘Whistleblower’ has all second-hand information, and almost everything he has said about my ‘perfect’ call with the Ukrainian President is wrong (much to the embarrassment of Pelosi & Schiff), why aren’t we entitled to interview & learn everything about the Whistleblower, and also the person who gave all of the false information to him,” Trump said in a statement.