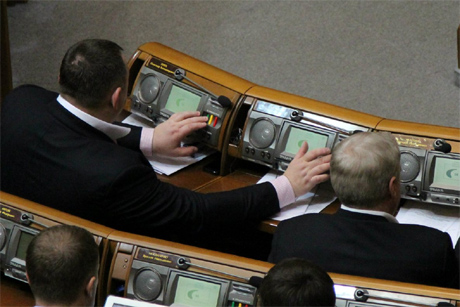 Ukrainian parliamentarian Olexander Gerega votes for both himself and his neighbor in an attempt to test the new law enacted to battle double voting. Gerega worked with civic watchdog organization Chesno to prove double voting would continue despite new regulations. (Ganna Grabarska/Chesno)
Europe

The law went into effect Dec. 13; in the first parliamentary session thereafter, on Dec. 18, a member of parliament (MP) tested the waters. MP Olexander Gerega deliberately double voted as part of an experiment in collaboration with the civic watchdog group Chesno.

MPs are required under the new law to register before entering the session, at which time they receive a personalized electronic card that allows them to vote. Gerega was able, however, to register and get a card for both himself and another MP in a neighboring seat who was absent.

Opposition MP Lesya Orobets commented on the physical fight that broke out in Parliament on Dec. 13: “[This was a] fight for a personal vote. Regionals [Party of Regions members] have serious problems with violation of regulations. It seems that in this convocation they’ll have to reckon with both the opposition and with the requirements of the law.”

The nationalist party Svoboda has suggested voting by fingerprint.

MP Viktor Baloha explained that MPs often vote for their absent neighbors because “the parliamentary majority doesn’t really have an attendance, which will provide 226 votes [the number of votes needed for a majority].”

Party of Regions holds a slim majority in Parliament and needs every one of its votes.

According to Chesno and Ukrainian publication Ukrainian Pravda, the worst MP for absenteeism in the previous Parliament was multibillionaire Rinat Akhmetov. [ http://www.chesno.org/events/385/ ] During his 4.5-year term, he registered for only one session.

‘Understanding the Principle of Parliamentarianism’

Some Kyiv voters shared their opinions on double voting with The Epoch Times.

“This is a combination of interests of people who are in Parliament with their own affairs … and not understanding the principle of parliamentarianism,” said entrepreneur Vadym Vasylchuk. “Voting must be strictly personal with the presence of an MP in parliament—for that issue he was elected to his term. If he can’t vote, he has to resign,” Vasylchuk added.

Developer Dmytro Legkyi put it simply: “I think this is fraud.”

MP Baloha spoke to the wider trends of corruption in Ukrainian politics and society.

“If you think about responsibility, morality, spirituality—then, sorry, people do not always vote in Ukraine responsibly. [People vote] often for money, often for buckwheat,” Baloha said, referring to political campaigns in which impoverished voters are given food to win their loyalty. “And you want responsibility? Not this time.”