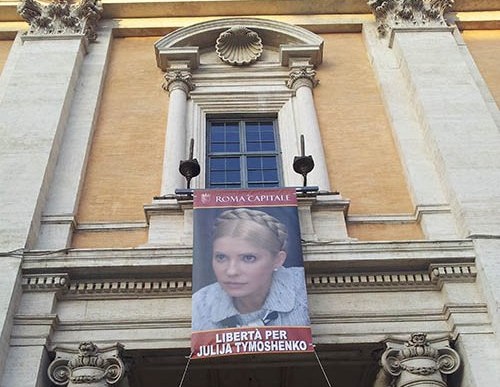 Tymoshenko was arrested in August 2011 then sentenced by a Kyiv court to seven years for abuse of office in October. She had been serving her term at a facility in Kharkiv, one of Ukraine’s biggest cities, until health problems appeared and she was transferred to hospital in May.

In honor of her birthday, as an exceptional occasion, the State Penitentiary Service of Ukraine allowed her daughter Eugenia Tymoshenko a relatively long three-day visit.

Today representatives of the opposition leader’s party “BYUT—Batkivshchyna” (“Block of Yulia Tymoshenko—Motherland”) held a small protest near the entrance of the hospital.

The protest included setting free balloons and doves as a symbol of freedom. The former prime minister was also sent bouquets of red and white roses by friends and supporters.

Yesterday, Rome also expressed support for Tymoshenko. On a building in Rome’s Capitoline Hill, the city administration hung her portrait with words “Freedom for Julia Tymoshenko.”

The European Union and other Western countries view the arrest as a purely political move by President Viktor Yanukovych attempting to silence his main rival.

On her last birthday, which she spent in a pretrial prison in Kyiv, her supporters organized a concert for her.

Viktor Baloha, a former Minister of Emergencies of Ukraine, wrote a sort of tribute to her on Facebook: “Julia Volodymirivna [reference to father], today is your birthday. I know you well, as we worked together, though mostly we were at different sides of one team. Many things you did I have not always appraised positively. Many people, whom you trusted, betrayed you. And they continue to betray. But you haven’t capitulated.”

However, in contrast to the general support of Tymoshenko in the West, many Ukrainians are less inclined to defend their ex-prime minister.

Today, the mood among Ukrainians toward their political leaders is one of disappointment and distrust, with Tymoshenko being seen as one of distrusted leaders, says Volodymyr Fesenko, a famous Ukrainian political analyst.

Irrespective of the lack of will to defend Tymoshenko, her party remains popular in the country. In national elections last month, BYUT—Batkivshchyna won 101 out of 450 parliamentary seats.

The current government under President Yanukovich, accuses Tymoshenko of signing a bad gas contract with Russia in 2009, leading to excessively high gas prices. Even now, Ukraine pays more for Russian gas than gas from Europe.

The strategy now is for Ukraine to shed its dependence Russian gas. The Ukrainian edition of The Epoch Times reported that, according to Ukrainian official statistics, in 2012, the country managed to lower its consumption of Russian gas by 7.7 percent. Recently, Ukrainian state gas company Naftogaz made an agreement with German company RWE Supply and Trading to supply 10 billion cubic meters of gas per year to Ukraine.