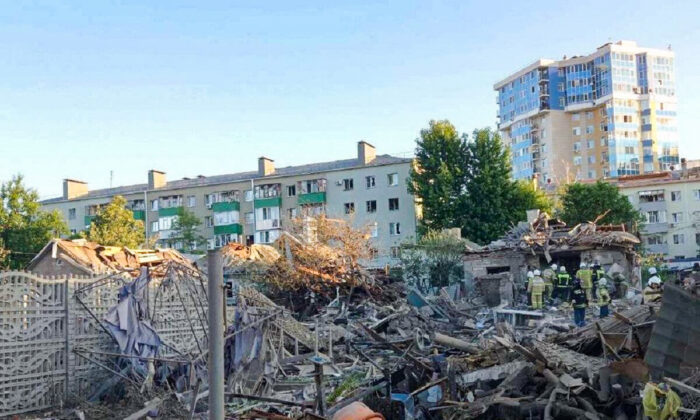 Rescue specialists work at the site of a destroyed residential building after blasts in Belgorod, Russia, on July 3, 2022. (Alexey Stopichev/BelPressa/Handout via Reuters)
Russia-Ukraine War

The governor of Russia’s Belgorod region, Vyacheslav Gladkov, confirmed the casualties to Russian state-backed media, saying that air defenses were also triggered. Some of the air defense systems were able to intercept the alleged Ukrainian missiles, causing debris to fall on a residential building, according to Russia’s Defense Ministry.

“Last night, from 03:00 to 03:30 a.m. Moscow time, the Kyiv regime carried out deliberate strikes using Tochka-U ballistic missiles with cluster munitions and Tu-143 Reis drones against residential areas of Belgorod and Kursk, where there are no military facilities,” the Ministry of Defense said, reported state media.

“The missile attack was purposefully planned and carried out against the civilian population of Russian cities,” the official statement added.

Gladkov told RT that several apartment buildings and three-dozen smaller houses were damaged in the incident. Belgorod is located about 30 miles from the Ukraine–Russia border.

The Epoch Times could not independently verify Russia’s claims.

Defense Ministry spokesman Lt. Gen. Igor Konashenkov said that Ukrainian forces also allegedly sent two Tu-143 Reys drones that were “loaded with explosives” toward the city of Kursk, which is close to the border. Both drones were destroyed, he said, adding that Ukrainian forces targeted Russian areas with “no military strikes” in the overnight, cross-border salvo.

It comes as Russia said Sunday that it now controls Ukraine’s eastern Luhansk region, after capturing the final Ukrainian holdout of Lysychansk, although Ukraine has yet to comment after reporting heavy fighting there. Since 2014, portions of Luhansk and Donetsk have been held by pro-Russian separatists.

After fierce Ukrainian resistance prevented Russian from seizing the capital Kyiv after its Feb. 24 invasion, Moscow turned its focus to taking full control of Luhansk and Donetsk provinces in Ukraine’s eastern Donbas region.

Russian Defense Minister Sergei Shoigu informed President Vladimir Putin that Luhansk had been taken over, the defense ministry said, after Russia earlier said its forces had captured villages around Lysychansk and encircled the city.

The minister said Russian forces and their allies in the area had “gained full control over the city of Lysychansk.”

The developments on Sunday come days after Russian forces allegedly fired missiles at a shopping center full of civilians, according to the Kyiv government.

Ukrainian President Volodymyr Zelenskyy claims roughly 1,000 citizens were in the shopping area when the attack was carried out, with reports saying that at least 18 people were killed and more were injured.