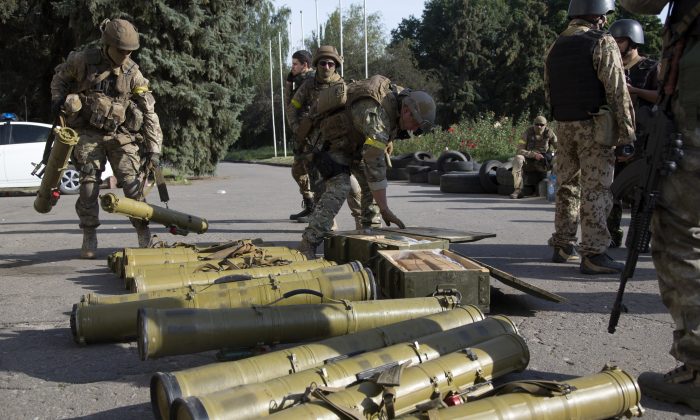 Ukrainian government army soldiers examine weapons captured from rebels in the city of Slovyansk, Donetsk Region, eastern Ukraine on July 5, 2014. By late afternoon on Saturday, Ukrainian troops were fully in control of rebel headquarters in Slovyansk, a city of about 100,000 that has been a center of the fighting between Kiev's troops and the pro-Russia insurgents. (AP Photo/Dmitry Lovetsky)
Crisis in Ukraine

“Thanks to cooperation with the local population we got to know that the arms and ammunition depot was located in this church,” a Ukrainian soldier said.

Meanwhile aid is been delivered to the region while one music teacher said another day of bloodshed is the last thing she wants to see. “We didn’t need it. We were all scared when weapons were everywhere, even at the market. It was terrifying. I was born in 1942, in February 2nd, on the day of the Battle of Stalingrad, and I haven’t seen such terror and genocide in my life. I think nothing similar to what I’ve seen in Slovyansk happened, even during the great patriotic war.”

Several hundreds gathered in Lenin Square to grab a share of the food handed out by the Ukrainian military. Ukrainian forces recently gained control of the city that was once a rebel stronghold rising again the blue and yellow national flag.