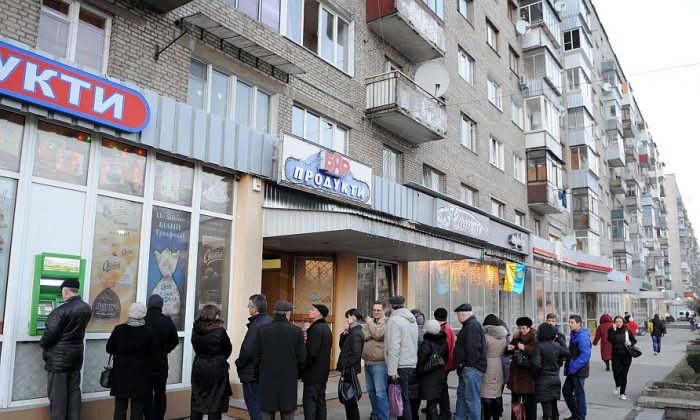 People line up to withdraw money from an ATM in the western Ukrainian city of Lviv, Feb. 20. (Yuriy Dyachyshn/AFP/Getty Images)
Business & Economy

The situation in Ukraine is similar to Bitcoin exchange Mt. Gox. Everybody wants their money, but there is not enough to go around.

The newly appointed governor of Ukraine’s central bank, Stepan Kubiv, said Monday that as much as 7 percent of total bank deposits were withdrawn Feb. 18–20. The $2.9 billion (30 billion hryvnias) in cash was gobbled up by anxious depositors during a time of intense fighting between protesters and government forces in Kyiv.

If too many people demand cash for their bank deposits, banks are forced to either shutdown or declare bankruptcy because they usually don’t have enough vault-cash to pay out. Typically banks in Western countries have around 10 percent of deposits in cash, although figures in emerging markets may be higher.

But people aren’t only going for their cash; they are also funneling money out of the country in record numbers. As a result of the money outflow, the Ukrainian central bank had to abandon its peg to the dollar of 8.7 hryvnias set on Feb. 7, and the currency immediately crashed to a record low of 10.4 hryvnias per dollar Wednesday.

Authorities tried to stem the decline by selling off foreign currency reserves to support the hryvnia, but these reserves have been reduced to a mere $15 billion.

Even the imposed capital controls could not prevent the decline. For two weeks now, private citizens are only allowed to own foreign currency worth 50,000 hryvnias or $4,807.

Kubiv also announced a plan to provide stabilizing loans to banks to deal with the cash outflow, but it’s likely the country won’t survive financially without outside help. The interim government has estimated it needs $35 billion of foreign help to make payments for salaries, pensions, and maturing bonds in 2014 and 2015.

“Assuming Russia may find it less appealing to financially back Ukraine, we see a new IMF deal increasing in probability, although the [conditions] that the IMF would impose would make it hard for Ukraine to avoid recession in 2014,” Citigroup’s Tina Fordham wrote in a note to clients.