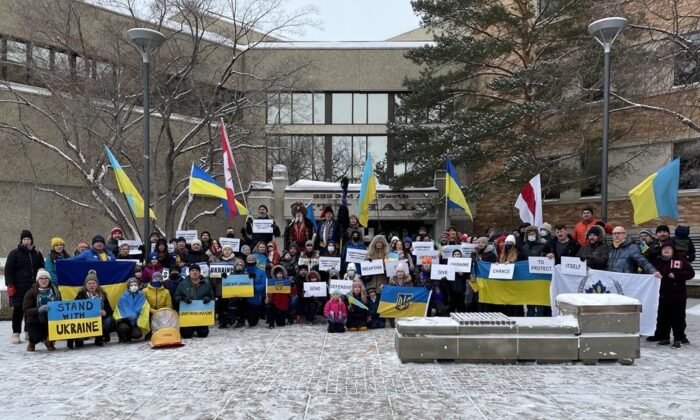 Iryna Matsiuk checks the news as soon as she wakes up each morning, hoping the escalating Russian-Ukrainian crisis won’t put her family in harm’s way.

Matsiuk, who has been living in Saskatoon since 2011, has a sister living in the capital city of Kyiv and her mother and grandmother live in the northwestern area of Volyn.

“Last weekend, I actually was pressuring my sister, asking, `Do you have an evacuations plan?'” Matsiuk said. “(Kyiv) is a big city and it’s not the easiest city to get out of, especially if everyone starts leaving.”

Her friends and family in Ukraine have been staying calm as tensions with Russia escalate, but Matsiuk said she can’t help but worry for them.

“We still hope that there will be some kind of resolution, maybe not diplomatic because it doesn’t seem to be a likely scenario right now, but at least stop where it is now and doesn’t escalate further,” she said.

Matsiuk, who volunteers with the Saskatoon chapter of the Ukrainian Canadian Congress of Saskatchewan, has been organizing rallies in the city to bring attention to the Russian aggression in Ukraine.

The group’s next rally will be in front of Saskatoon City Hall on Wednesday evening.

But the threat of an intensifying war and invasion is affecting many across Canada, which is home to more than one million people of Ukrainian descent, census data indicates.

Matsiuk said growing up in the Soviet Union meant a lot of Ukrainian culture, including dance and music, was not encouraged.

She said she was pleasantly surprised when she first came to Canada and saw how many of her country’s traditions were practised by people whose family had been here for generations.

Vitalii Milentyev, president of the Alberta Ukraine Chambers of Commerce, said Ukrainians began settling in Canada more than 120 years ago and each generation had always hoped for an independent Ukraine.

“Ever since the first Ukrainians arrived here, that part of the world and that territory was under somebody else’s rule … and those rare moments of independence were very desired to those who had fled the country,” said Milentyev, who lives in Edmonton.

“In 1991 when the U.S.S.R. had collapsed, there was that overwhelming joy and widespread support for Ukraine, because it was for the first time in probably three or four generations that those whose ancestors had come to this country in search for a better life were actually seeing a glimpse of hope for their motherland.”

Late Monday, Russian President Vladimir Putin signed a decree recognizing two regions in eastern Ukraine as independent entities and ordered troops into these regions for “peacekeeping” missions. The move has been seen as the continuation of a Russian invasion of Ukraine. In 2014, Russia invaded and subsequently annexed the Crimean Peninsula from Ukraine.

On Tuesday, Canada announced sanctions on Russia in response to the Kremlin’s deployment of forces into eastern Ukraine.

Trudeau also said Canada is sending up to 460 additional Canadian Armed Forces members to Latvia and the surrounding region to bolster NATO.

Milentyev said Putin “only understands the language of force and power.”

He said Canada needs to be arming Ukraine and providing humanitarian help to strengthen the country and force Russia into negotiations.

Milentyev’s parents still live in Odessa and he said he will look for ways to get them out of Ukraine if the situation worsens.

Putin has argued that his government is also protecting the minority rights of Russian-speaking Ukrainians in the eastern part of the country.

But Milentyev, who grew up speaking Russian, said they are not in need of Russian protection.

Denys Volkov, who is also a Russian-speaking Ukrainian, agreed.

“It doesn’t matter what language you speak. Ukraine is a multi-ethnic country and people still want Ukraine to be independent,” said Volkov, who has been living in Winnipeg for 16 years.

“You can speak whatever language you want. It’s a free country. It’s a democratic country ? Russian-speaking Ukrainians have the same rights as everybody else.”

Volkov said Canadians should be concerned about Russian expansionism because Canada shares a border over the Arctic.

“For those who think this conflict is happening somewhere far away from Canada and it’s not important for us, I would disagree,” he said.

“What Russia is doing can affect everybody down the road.”