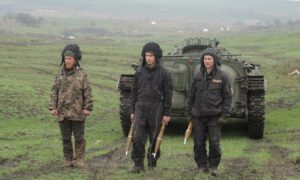 Ukraine Says Russia Will Soon Have Over 120,000 Troops on Its Borders
0
Share Now
TelegramFacebookTweetEmailTellMeWeReddit
Copy Link 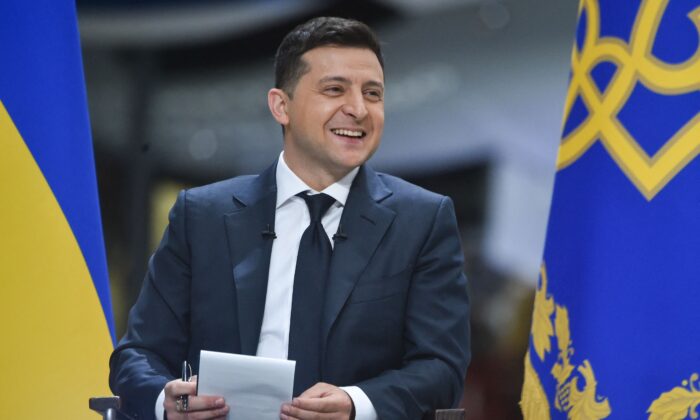 “We were very surprised,” Zelensky told Axios of the Biden administration’s decision to waive sanctions on the company and CEO overseeing the construction of Russia’s Nord Stream 2 natural gas pipeline project last month.

The pipeline, which is roughly 95 percent complete, would double the capacity of the existing Nord Stream duct to deliver gas to Europe from Russia through Germany under the Baltic Sea, weakening European energy security. It’s expected to be completed this year, with Russian President Vladimir Putin announcing on June 3 that the first of the two lines is now complete and that Russia’s majority state energy company Gazprom is “ready to start filling Nord Stream 2 with gas.”

“Nord Stream 2, according to our understanding—according to the security understanding of not only Europe, I am sure, but also of the United States of America as our strategic partner—we understand that this is a weapon, a real weapon … in the hands of the Russian Federation,” Zelensky said.

“It is not very understandable, I feel, and definitely not expected, that the bullets to this weapon can possibly be provided by such a great country as the United States.”

In late 2019, Congress and the Trump administration sanctioned a number of entities tied to the construction of the $10.5 billion pipeline. The sanctions were part of the National Defense Authorization Act, which had a stated goal to “minimize the ability” of Russia to use Nord Stream 2 “as a tool of coercion and political leverage” and to stop Russia from shifting energy exports from Ukraine to other countries. Russia had vowed to continue the project in spite of the implementation of those sanctions.

Russia has previously cut fuel deliveries to Ukraine and parts of Europe in winter amid pricing disputes.

In announcing the waiver of sanctions last month against Nord Stream 2 AG and its CEO, Matthias Warnig—a known ally of Putin—Secretary of State Antony Blinken said the company had engaged in sanctionable activity, but that the move was in the national interest of the United States. The statement noted although the United States will continue to oppose the project, the exemption of sanctions is in line with the commitment to rebuild relationships with European allies.

The Ukrainian president said Biden had offered him “direct signals” that the United States was prepared to block the pipeline. The White House said as recently as January that the president believes the pipeline is a “bad deal for Europe.”

“I truly thought that when it came to Nord Stream 2, the United States remained the last standing outpost,” Zelensky said. “We understand that only the U.S. is capable of stopping this construction.”

Zelensky told Axios that his anger upon learning of the news through a White House press briefing has now turned to disappointment.

“I learned about it through the press. I feel that … well, between strategic partners the relations should be direct,” he said.

Biden said although he opposed the project from the beginning, the pipeline is now nearly finished and cited the importance of good relations with Germany.

The Ukrainian president suggested that a “serious conversation, a serious roadmap” be laid out as part of a joint effort between the United States, the European Union, and Ukraine.

“I would like to reach a new level of relations with the United States … transparency, an understanding regarding the Membership Action Plan, regarding energy security of Ukraine … the assistance with returning our territories and defending our sovereignty,” he said.

“This is crucial for us, only because there’s a war going on, and our time is measured not in minutes, but in human lives—the number of lives that we are losing at this war today.”

White House press secretary Jen Psaki said Biden and Russian President Vladimir Putin are set to meet in Geneva on June 16 to “discuss the full range of pressing issues, as we seek to restore predictability and stability to the U.S.–Russia relationship.”

Zelensky, meanwhile, has offered to meet Biden “at any moment and at any spot on the planet” to discuss the issue before the meeting as “the guarantor of the Constitution of Ukraine.”

“I myself am ready to defend Ukraine at any moment,” he said.