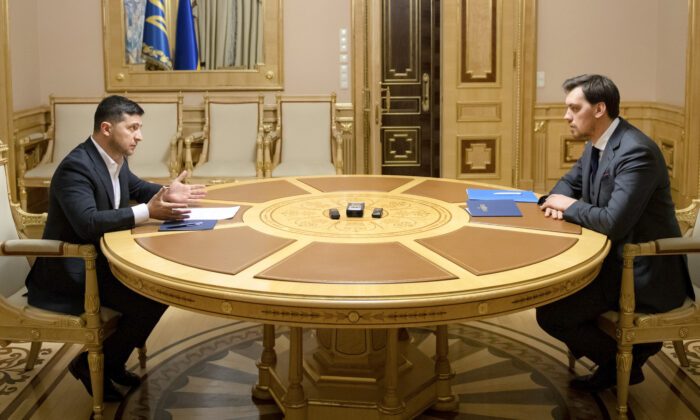 Honcharuk did not deny him having made the remarks. However, he said the recordings were edited in such a way that would make it seem as if he was being disrespectful.

“I came to the position to fulfill the program of the president. He is for me a model of openness and decency,” Honcharuk said on Facebook last Friday, Deutsche Welle reported. “However, in order to remove any doubts about our respect and trust in the president, I wrote a letter of resignation and handed it to the president with the right to submit it to Parliament,” he added.

Later that day, in a televised meeting to “clear the air” between the two, Zelensky called the situation “very unpleasant,” according to the BBC. He pardoned Honcharuk, saying “I decided to give you and your government a chance if you manage to solve important issues that the public worries about. It’s not a moment when we can afford economic and political destabilization,” the Associated Press reported.

Zelensky cited the great trust the public has in Honcharuk, who, along with his cabinet, took office only last September. “You have not yet repaid this loan to our society,” Zelensky said.

The tape, which was uploaded to an anonymous Youtube channel earlier this week, seems to contain fragments of a conversation between Honcharuk, the finance minister, and the head of the country’s central bank. On it, a voice that seems to be Honcharuk’s can be heard speaking in a somewhat degrading manner about the country’s financial prospects and the limited possibilities of Zelensky, a former comedian with no political background prior to his presidency, to really make a difference.

“There used to be good business managers, under whom the [economic growth] was 4.6 percent. Then Sorosites came, and the economic growth is 2 percent and less. And you cannot prove anything to anyone,” the voice said, the BBC reported.

The “Sorosites” the voice mentions is possibly a reference to allegations of the country’s financial resources being fueled by George Soros, the American billionaire who has significant interests in formerly communist Eastern European countries.

“And all of this, together, induces in the president a feeling that the situation is uncontrollable,” Honcharuk said. “We do not understand. We have no plans.”

Zelensky’s political career has been a remarkable one, to say the least. Just a few years ago, he was active as a comedian. His only political experience was that of starring in a sitcom, “Servant of the People,” wherein he played a history teacher who became the nation’s president because of a viral rant he made against the hidden powers that plunder the state’s financial resources.

A few months later, Zelensky, 41, was elected president after he promised to fight against the establishment, heading a party called “Servant of the People.”

Zelensky then invited 35-year-old lawyer Honcharuk, an independent, to become his prime minister and assigned him with the task of restructuring the country’s faltering economy by breaking the power of the financial establishment, addressing the multimillion-dollar bonuses given to executives of the state-controlled gas company and the top salaries earned by members of the ministry.