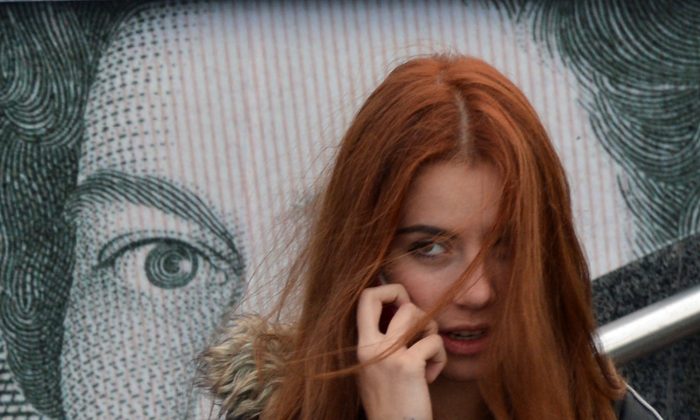 A girl speaks on a mobile phone in Kyiv, Ukraine, on Nov. 12, 2012. Addressing e-waste, including used mobile phones, is on Ukraine's list of ecological changes to make—119th on the list, with no funding plan. But an EU agreement may change that. (Sergei Supinsky/AFP/Getty Images)
Europe

KYIV—Electronic waste has become a major ecological problem in the world in recent years. While developed countries have made progress in resolving the problem, this waste continues to pile up in the dumps of developing countries like Ukraine.

According to United Nations, about 50 million metric tons of electronic waste, or e-waste, is produced in the world annually, including used computers, mobile phones, television sets, refrigerators, and more.

European Union (EU) countries and other developed countries collect and recycle up to 80 per cent of such waste. It is difficult to tell what portion of e-waste is recycled in Ukraine, as the Ministry of Ecology does not keep track, it told The Epoch Times. In Ukraine, 6.2 percent of all solid domestic waste was recycled in 2012, said the ministry.

Contained in 1 million mobile phones is a combined 53 pounds of gold, 550 pounds of silver, 20 pounds of palladium, and about 2,000 pounds of copper. From about 6,000 phones, it is possible to earn $15,000 through the sale of precious metals, the report states.

From the dumps, chemicals contained in electronic devices emit vapors or seep into ground water. A single gram of evaporated mercury can pollute more than 11 million square feet of air, while one AA battery is able to pollute 60.5 square feet of ground or 105 gallons of water.

The U.S. Environmental Protection Agency (EPA) has outlined the effects of lead, cadmium, mercury, Polyvinyl Chloride Plastics (PVCs), and other materials that comprise e-waste. Lead can damage the nervous system and adversely affect brain development in children. Cadmium is a toxic substance that can accumulate in the kidneys. PVCs can contribute to air pollution, and thus respiratory ailments.

Some studies have also raised concerns about the well-being of people working in, and living near, e-waste recycling facilities, showing that even the issue of effective recycling is still debated.

TCO Development, based in Stockholm, Sweden, certifies IT products that use fewer hazardous substances as a way to reduce the material use overall.

An Action Plan and an Incentive

The Ukrainian National Action Plan for Defending the Environment provides a ray of hope. Formed in 2011, it provides an action plan to reach ecological goals set for 2015. One of the points in the plan includes developing and launching a system for collecting and recycling e-waste.

However, the source of financing for this plan is still not defined.

Nonetheless, Jean-François Moret, a representative of the EU in Ukraine, remains positive. He believes that Ukraine will solve the problem in the near future, motivated in part by EU pressure.

Ukraine has anticipated the signing of an EU association agreement since 2011 when the agreement was drafted. It has yet to be signed, hinging on various requirements that Ukraine must first meet. The association agreement officially establishes the EU’s relationship to a country in an all-encompassing framework, is in some cases used to prepare countries for future membership in the EU.

“Currently, Ukraine and EU plan to sign the association agreement by the end of the year,” Moret said. “There is a term during which Ukraine must implement directives of the EU regarding dealing with wastes—from three to five years. All this has to become a part of Ukrainian legislature from the moment the agreement comes into effect,” he explained.

Moret says a crucial element of the EU directive on waste-management is extended producer responsibility.

“If you force people to pay for electronic waste, they won’t do it,” he said. He said that if a company puts new electronic equipment on the EU market, the company must take it back when the user is finished with it.

“It means that any consumer who bought electronic equipment may return it to special receiving centers for collecting waste,” Moret explained. “After this, both manufacturer and retailer have a responsibility to organize … [the management] of such wastes.”

All interested parties—consumers, businesses, and authorities—should take responsibility for implementing e-waste policies, said Dmytro Shulga, director of the European Program at the International Renaissance Foundation, an organization that promotes EU reforms in Ukraine.

“When there are talks about European standards in general, very often ecologic standards are, as I see, not a priority,” Shulga said. “And in discussions about politics in Ukraine, unfortunately, it seems that ecological issues are not so important for people.”