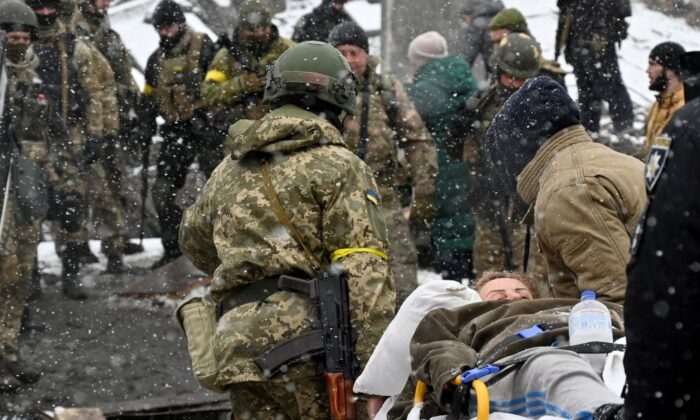 Ukrainian soldiers carry a wounded woman during the evacuation by civilians of the city of Irpin, northwest of Kyiv, Ukraine, on March 8, 2022. (Sergei Supinsky/AFP via Getty Images)
Viewpoints

A month into the unfolding tragedy in Ukraine, and every day we are confronted with images of heroic men and women defending their country. Even some women who initially fled to other countries are now returning to contribute to the war effort, the news tells us. “Ukraine women are volunteering to fight and history shows they always have,” boasts an NPR news story.

Media stories for the last month have run hot with stories about brave women and Twitter posts of women in combat uniform.

Except there are comparatively few Ukrainian bullets from women. The government made sure of that by forcing every male aged 18 to 60 to defend the country while women were given leave to flee.

After decades of feminists demanding equal treatment of women, including the right for women to serve through to the front line in the armed forces, that demand seems to be quite forgotten.

One lone male voice on TikTok called out the feminist silence; he attracted a wave of criticism and his video was removed.

The TikTok user, @notpoliticalspeaking, had the temerity to point out that the reported 32,000 women in the Ukrainian military weren’t all that many—given that, according to his estimation, the country has 17 million women of age.

Social media ran hot with dozens of articles calling out the man “for his ignorance and misogyny.”

But he’s right—the Ukraine crisis has exposed the glaring hypocrisy of feminism today, where feminists talk about equality but happily exploit old-fashioned chivalry, that demands only men are disposable.

“Women are too valuable to be in combat,” said Caspar Weinberger, the U.S. secretary of defense, back in the 1980s, a time when military leaders were still allowed to say such things.

Now feminists sit silent as Ukraine forces their entire adult male population to defend their country, while the valuable women are safeguarded.

Traditionally this has been justified using the evolutionary argument—that the size of the next generation is constrained by the number of fertile females and a species can tolerate the loss of males more easily than the loss of females.

No one dares point out how that hardly applies to all those 40-something single women past childbearing age that we watched scrambling to get on those crowded trains out of the county.

The other arguments for offering women special protection just don’t hold water anymore. The active role played by women in the military puts paid to traditional arguments about women’s lack of strength—and gender-based strength is not as critical when facing most modern weaponry.

Let’s face it—whilst no one would quarrel with the need to protect children and arguably their mothers, the view of women as a protected class is simply a legacy of traditional, chivalrous thinking which is far too useful for feminists to discard.

So they have their cake and eat it, taking every possible opportunity to pretend that this isn’t all about exploiting men by claiming women suffer too—perhaps even more than men.

The women-suffer-more tactic was made famous by Hillary Clinton who declared: “Women have always been the primary victims of war” because they “lose their husbands, their fathers, their sons in combat” and because they are “often left with the responsibility, alone, of raising the children.”

Warren Farrell, in “The Myth of Male Power,” mentions an article in Parade magazine about the 40 million Russian/Soviet men who were killed between 1914 and 1945. The article was titled, “Short End of the Stick,” referring not to the men dying but to the women stuck with factory and street-cleaner positions due to the loss of so many men.

As the horrific Ukraine situation continues, social media is running hot with messages talking about the plight of women, often barely mentioning men.

A Guardian article describes the uncertain future faced by “the women, children, and others who are being evacuated.”

Others? Presumably, that includes pesky, unmentionable men—like men too old to fight.

Another Twitter post urged men to fight hard—echoes of the White Feather that women used to hand to young men in World War I, shaming them into doing their duty to protect women.

There’s a video of Ukrainian men being arrested trying to leave the country and being handed tulips, presumably a similar insult to their manhood.

A fascinating article, published in The Conversation, by a Newcastle law professor, claims that banning men from leaving Ukraine violates their human rights. Astonishingly, there’s not one word in the entire article about the discriminatory treatment of men, even though the author raises LGBTQI+ people’s fears that they might face discrimination if captured by Russians.

I was shocked to hear the truth behind the coverage of the kidnapping of the 200 schoolgirls by Boko Haram, the Nigerian Islamist group. Remember all the glitterati lining up to protest this event?

How come we were never told that two months earlier, Boko Haram set fire to a school dormitory killing 59 sleeping boys–the third tragedy of its kind in just eight months. And why weren’t we informed when the attacks on boys continued? Where was the coverage when over 330 boys were kidnapped just over a year ago?

Boys’ lives are worthless or often regarded as pretty worthless, in the eyes of Western media. One of the few feminist contributions to this discussion that I have come across was an article from Daily Mail columnist Amanda Platell, talking about a photograph of a Ukrainian father, Serhii, cradling the body of his dead 15-year-old son.

She writes: “In our demand for equality here in Britain, we women have for decades tried to emasculate men, to stamp out the warrior and demand they get in touch with their feminine side. Yet we have been so, so misguided.

“What arrogance for us feminists to insist they should emote more. Try telling that to poor Serhii as he cradles his dead son. Let’s hope that one good to come from this terrible war will be that in the West we finally embrace the goodness, inherent decency, and courage in men.”

A rare and touching insight amidst the blinkered coverage of men’s role in this dreadful unfolding tragedy.

And I couldn’t resist a wry smile at a meme saying, “When barbarians are at the gate, suddenly masculinity is no longer toxic.”