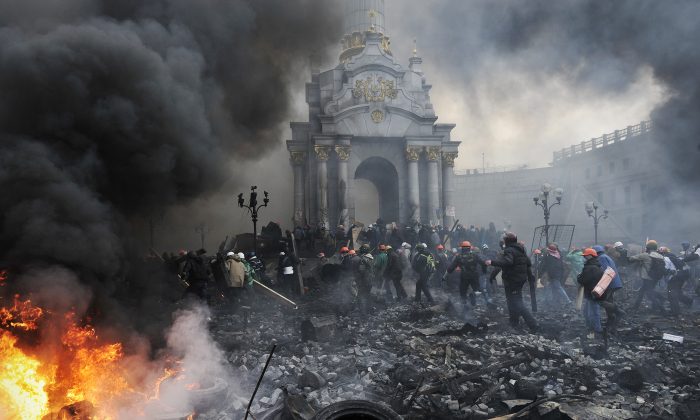 Excerpts from a speech given by the Hon. David Kilgour, J.D., to a public gathering at the Ukrainian Embassy in Ottawa, Canada, on Feb. 23, 2014.

Key points about the crisis in Ukraine do not seem to have been highlighted, including:

Two months of protests in Kyiv and across western Ukraine and into its eastern region appear now to have succeeded in achieving a renewed post-Soviet democratic integrity and national sovereignty by a courageous and long-suffering people.

Canada was the first Western country to recognize Ukraine’s independence after 28 million—92 percent of eligible voters—voted in their 1991 referendum to declare independence from Russia. Many Canadians have a long and close history with Ukraine.

Canadians of origin in Ukraine (numbering about 1.2 million) have played since the 1890s an important role in our own history, following three waves of immigration from what is now Ukraine.

In World War II, an estimated 40,000 Ukrainian-Canadians, or more than ten percent of the entire community then in Canada, enlisted in our armed forces. Between 1947 and 1953, approximately 34,000 Ukrainians came to Canada, many well-educated professionals. They and the generations arriving earlier helped shape Canada into what it is today.

The protests in recent months by widely-based opposition groups, including an estimated 90 percent of the residents of Kyiv and much of the entire population of Ukraine, were in part against the deeply corrupt President Viktor Yanukovych.

Ukraine is not Russia and the world’s advocates for human dignity must do what we can to advance this reality.

For two months, Ukrainian Canadians and other thoughtful citizens have been in anguish as they’ve seen Yanukovych brutalize their “brothers” and “sisters” as he attempted to introduce a police state with the encouragement and help of the Kremlin. Canada must stand firmly with Ukrainians generally to maintain national independence and democracy.

Fortunately, the timing of the Winter Olympics has preventing Putin from unleashing Russian violence in Ukraine at least until the Games torch was extinguished earlier today in Sochi. Canada, Europe, and the United States must act quickly.