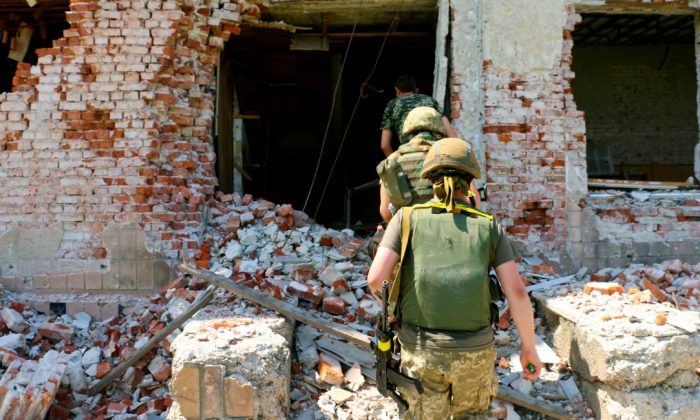 Many villages in eastern Ukraine have been reduced to ruins by fighting. (Nolan Peterson/The Daily Signal)
Crisis in Ukraine

The U.S. State Department on Monday, Dec. 14, updated its travel warning for Ukraine, urging all U.S. citizens in the eastern Donbas region and in Russian-occupied Crimea to get out.

The warning is consistent with previous ones concerning the Ukraine conflict, reflecting continued uncertainty about the fate of the fragile cease-fire, which, despite a marked reduction of fighting since September, hasn’t taken hold fully.

“There have been multiple casualties due to landmines in areas previously controlled by separatists, and separatist leaders have made statements indicating their desire to push the front line to the administrative borders of the Donetsk and Luhansk oblasts,” the State Department warned Monday, referring to the two separatist-controlled territories.

The statement continued: “Individuals, including U.S. citizens, have been threatened, detained, or kidnapped for hours or days after being stopped at separatist checkpoints.”

Packed within the warning is a piece of good news: The cities of Kharkiv and Odesa (Ukraine’s second and fourth largest cities, respectively) were taken off the State Department’s latest advisory. A July travel warning included the two cities.

In an emailed statement to The Daily Signal, the State Department said it had “eliminated language urging citizens to exercise extreme vigilance in Odesa and Kharkiv” after “ongoing assessments of the security situation in those areas.”

The State Department declined to comment on whether any specific intelligence led to lifting the warning.

Kharkiv and Odesa have remained under Ukrainian government control. Yet, according to Kyiv, Russian intelligence operatives abetted separatist movements in both cities, spurring terrorist attacks and occasionally fatal civil unrest.

Myronovych said the current pace of fighting is consistent with the low level of conflict that has lingered since September. In the preceding three days, Dec. 8 to 11, Ukrainian positions were attacked 175 times, he added.

Kyiv claims the attacks on Ukrainian positions are an attempt to lure Ukrainian troops into escalating the conflict and provide combined Russian separatist forces a justification to launch an offensive.

The Ukraine war remains deadly. On Dec. 9, two Ukrainian soldiers died, and seven were injured when their vehicle struck a landmine. A continued ban on U.S. flights over eastern Ukraine also underscores that the region is still a war zone.

U.S. aircraft were banned from flying over parts of eastern Ukraine and Crimea under Federal Aviation Administration (FAA) regulations dating back to April 2014. The FAA expanded its restrictions on July 18, 2014, the day after a surface-to-air missile downed Malaysian Airlines Flight 17 near the Russian border in the Donbas, killing all 298 passengers and crew on board.

About six weeks ago, on Oct. 27, the FAA renewed its ban on U.S. flights over large swaths of eastern and central Ukraine. The agency cited the risk of commercial aircraft being shot down as well as conflicting instructions from Ukrainian and Russian air traffic controllers.

The lull in fighting in eastern Ukraine paralleled the beginning of Russian airstrikes in Syria in September.

Russia says it is targeting the Islamic State, the terrorist army also known as ISIS, which holds territory in Syria and Iraq. Moscow also complains that the United States has not been coordinating its efforts in Syria with Russian forces and that the U.S. divides up terrorists into “bad” and “good ones,” according to a Russian Ministry of Foreign Affairs statement.

The United States argues that Russia is defending Syrian dictator Bashar al-Assad and has targeted moderate rebels, some of whom the United States has trained and equipped.

Some analysts speculate that the Kremlin has sought to trade Western sanctions for Russia’s help in fighting ISIS. If so, the Kremlin’s gambit appears to have fallen short.

European Union leaders were expected to extend the sanctions Thursday by another six months, citing combined Russian separatist forces’ continued violations of the truce, known as Minsk II. Full implementation of the Minsk accord is the benchmark for rolling back sanctions on Russia, EU leaders say.

U.S. officials also have said sanctions on Russia will not be eased in exchange for Russia’s cooperation in Syria, a position that U.S. Secretary of State John Kerry reiterated when he met with Kremlin officials in Moscow on Tuesday: “It’s our hope that the sooner the Minsk agreements are implemented and implemented in full, the better, and U.S. and EU sanctions can be rolled back.”

The U.S. and EU put targeted economic sanctions on Russia in March 2014 following the occupation of Crimea. The sanctions were expanded following the downing of Malaysian Airlines Flight 17, which subsequent investigations blamed on a surface-to-air missile fired by Russian-backed separatists—a conclusion the Kremlin contests.

On Tuesday, Dec. 15, Kerry told reporters in Moscow that the United States was willing to work with Russia in fighting ISIS and was not pursuing “so-called regime change” in Syria. He said Russian President Vladimir Putin had taken “under advisement” America’s concerns about Russian airstrikes targeting moderate Syrian rebels.

In March 2014, Russia launched a hybrid invasion of Crimea with special operations and intelligence units. Both the United States and the EU said a subsequent referendum for the peninsula to join the Russian Federation was illegitimate.

Following the occupation of Crimea, in April 2014, a Russian-backed separatist movement in the Donbas escalated into open warfare.

According to Kyiv and NATO, as well as independent news reports, Russian troops and weapons flooded across the border that August to turn the tide of battle as Ukrainian forces gained momentum. The Kremlin denies military involvement.

Yet, despite the intense fighting, neither side was able to gain an advantage, and the conflict ground into a static stalemate of trench warfare, replete with daily heavy artillery attacks, mortars, tank shots, and sniper and small arms skirmishes.

The conflict cooled in September, when Ukrainian and combined Russian separatist forces agreed to a series of moves to withdraw heavy weapons from the front lines and scale back the fighting. The overall intensity of the conflict has decreased, but small skirmishes and tit-for-tat artillery strikes still happen almost daily.

According to the U.N., the conflict has killed more than 9,100 and displaced about 1 million.

Many villages and towns along the contact line are abandoned, bombed-out ruins. Landmines became a pervasive threat, having injured and killed dozens of Ukrainian soldiers since September.

The situation in Ukraine is unpredictable and could change quickly.
— U.S. Department of State

Civilians are able to cross back and forth from separatist to Ukrainian territory, but some families remain split across the front lines. Many who fled separatist regions in 2014 are afraid to return for fear of being arrested or kidnapped due to their alleged support for the government in Kyiv. This leaves many Ukrainians who fled from the Donbas de facto refugees in their own country.

Moscow has shown no appetite to annex the separatist territories as it did Crimea. Consequently, the separatist leadership has evolved its goals from establishing an independent territory called Novorossiya to remaining part of Ukraine as an autonomous territory.

A preliminary vote in Ukraine’s parliament in August to grant separatist-controlled territories more autonomy sparked deadly protests in Kyiv. The violence reflected the unpopularity of such a move within some sections of society and its potential to spur unrest.

“The situation in Ukraine is unpredictable and could change quickly,” the State Department said.