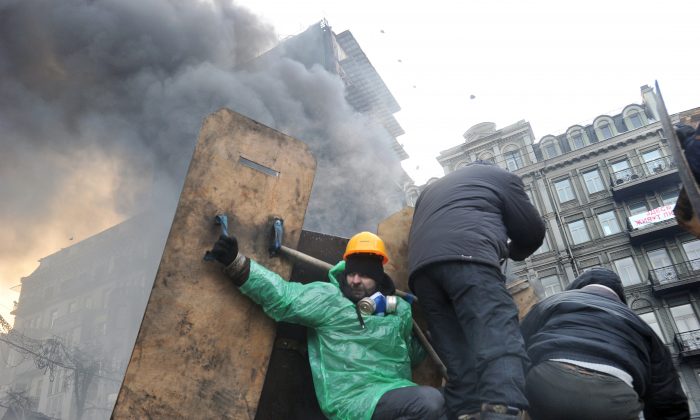 Over the past few days, Ukraine has taken a significant turn for the worse. Fighting between rebels and government forces has intensified, the civilian death toll has increased, and the war of words between Ukraine and Russia has further escalated.

To understand why this is the case and what it might mean, two questions should be asked: what has caused this deterioration and is this yet another step towards an increasingly inevitable full-scale and open military confrontation between Russia and Ukraine?

More than four months ago, on Sept. 5, 2014, the government in Kyiv and rebel leaders signed a ceasefire agreement in Minsk, followed by a memorandum on its implementation two weeks later. But there was no follow-through from either side. The best that can be said about the period since September is that violence became more sporadic, the rate at which people were killed in fighting, or as a consequence of it, slowed down, and neither side pushed overly hard for further territorial gains.

Yet, even this picture might be too optimistic. There were almost daily shoot-outs between pro and anti-government forces along the frontlines in the east of Ukraine—some 1,000 people have died since September (out of a total of almost 5,000 casualties over the course of the crisis) and fighting has been particularly intense around Donetsk airport. The airport—now reduced to rubble—remained a highly prestigious “prize” for either side, and fighting there continued even if only because of its symbolic value.

Earlier in the year, it had appeared that the Ukrainian government had the initiative—its forces re-captured some territory from the rebels prior to the September ceasefire agreement. But Kyiv’s military campaign quickly ran out of steam. To all intents and purposes, both sides were digging in—and the ceasefire agreement seemed to confirm a new status quo. Ukraine withdrew services and deliveries from the rebel-held areas and the rebels in turn continued to build their own institutions. It was not a phony (civil) war by any account, but for the most part it seemed as if each side was primarily interested in consolidating its gains, or containing its losses.

All of this changed about one week ago. Amid an intensifying battle over Donetsk airport, talks among the foreign ministers of the Ukraine Contact Group (Russia, Ukraine, France, and Germany) ended without progress and triggered the cancellation of a summit of heads of state, planned for Astana on Jan. 15 2015.

Ukrainian government forces then briefly retook the airport, but any momentum that this might have signaled was quickly lost in a decisive push by rebel forces (and allegedly also Russian troops) on several fronts, forcing Kyiv to abandon the airport again.

Somewhat disconnected from the realities of violence in eastern Ukraine, the foreign ministers of the Ukraine Contact Group held yet another round of crisis talks in Berlin on Wednesday and issued a joint statement calling on both sides to abide by the September agreement to cease hostilities and withdraw heavy weapons from the frontlines.

Despite this joint call for an end to violence representing some small progress, it is unlikely to lead towards a more stable ceasefire, let alone a settlement of the conflict. In fact, while some modest progress was made in Berlin, U.S. Secretary of State John Kerry perhaps reflected the situation on the ground more accurately when he accused the rebels of a land grab. NATO, too, has been ringing the alarm bells again over increasing Russian involvement in support of the rebels.

But this does not mean that the efforts of the Contact Group are meaningless or counter-productive—the fact that such high-level contacts persist and produce consensus, however modest it might be, is positive. As far as the presence of the Russian and the Ukrainian sides is concerned, it means that there are still meaningful channels of communication between the adversaries, while the participation of France and Germany levels the playing field between them somewhat and can also contribute to holding both sides to account should a more substantive agreement be achieved.

But the long list of essentially worthless agreements in the short history of the Ukraine crisis—from the Kyiv agreement of Feb. 21, the Geneva agreement of April 17, to the ceasefire agreements of Sept. 5 and 19, all of them broken or never implemented—does not bode well for a quick and sustainable breakthrough to even a stable ceasefire. This depressing history is accompanied by a similarly disheartening series of miscalculations by all sides in this crisis and a consequentially complete absence of any trust between the presumptive parties to yet another agreement in the future.

Meanwhile the United States has increased its military assistance to Ukraine on the one side and, on the other, Russian-backed break-away region Transnistria (in Moldova) has been conducting a “practice mobilization” of its armed forces on the border with western Ukraine. It is all but clear that miscalculations are likely to continue and the level of trust is unlikely to improve. This is a dangerous mix of factors that could yet make all-out war a self-fulfilling prophecy.

For the time being, the discussions in the Ukraine Contact Group are the only mechanism that can potentially avert such a scenario. But unless there is some credible follow-through by the opponents on the ground to the latest meager “agreement” achieved by the four foreign ministers, the window of opportunity that these ongoing discussions create may be closing fast—and with dire consequences.

Stefan Wolff is a professor of international security at the University of Birmingham in the U.K. This article was previously published on TheConversation.com