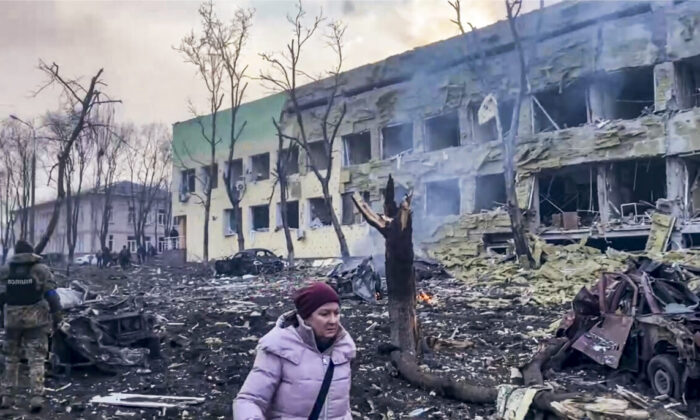 The aftermath of Mariupol Hospital after an attack in Mariupol, Ukraine, on March 9, 2022. (Mariupol City Council via AP)
Thinking About China

Ukraine Shows the Dangers of a Longer War

The Russian invasion of Ukraine has shown how a long war can quickly fade to the background of American interest, and any potential conflict with China has the same danger.

The conventional wisdom remains that in the event of war, the Chinese regime will quickly seize disputed territory, and the war might be over before anyone can react. This has been the Chinese Communist Party’s (CCP) strategic signature since it took power in 1949. In 2020, the CCP followed this method by seizing disputed territory in a flare-up with India.

China’s military spending, bellicose rhetoric, and wolf warrior diplomacy clearly show the CCP is planning for quick absorption of disputed territory in the future. But the war in Ukraine suggests that any potential conflict might take far longer than anticipated, which will test Americans’ disturbingly short attention span.

China’s military budget and military are indeed much larger than its cross-strait neighbor in Taiwan. Unlike Russia, China can focus its military in one region against a target much smaller than Ukraine.

But the CCP’s plan for quick domination is overly optimistic for several reasons. Russia is operating over land and has years of experience taking small chunks of contiguous territory, usually facing a little fight. Taiwan has many natural defensive advantages. Defeating a navy, transporting soldiers, securing the beachhead, and taking over a country of 23 million people is tough. And that is before the Chinese regime expects to do it with superweapons unproven in combat, an army with zero combat experience from the rank and file all the way to the senior leadership, and no experience in the cross-service coordination needed for an ambitious operation supported by cyberwarfare.

As a result of these factors, any potential war might take much longer than anticipated to settle. The danger in this scenario, as the American experience has shown, is that the American public’s attention wanes.

For example, Muslim terrorists have been ravaging Christian areas of African countries for years with little Western comment. The media and public cared for about half a minute when a group of schoolgirls were kidnapped but did little more than post a hashtag on Twitter before forgetting about it.

A more recent example is the debacle in Afghanistan. Despite being a foreign policy blunder that hasn’t been seen since Vietnam, very few Americans and publications talk about Afghanistan, the people’s impending starvation, or the citizens and legal American residents left behind. Yet the American public collectively yawns a short time later.

Regarding Ukraine and potentially Taiwan, this means that the world will react with outrage in February but shrug by May. The citizens and politicians in the West pledge tons of aid early in the war but may balk at paying for it later. Just two months after the war started, for example, the $33 billion the United States pledged for Ukraine led some to wonder if it was “too expensive.”

The United States would face additional economic factors limiting its interest in any conflict involving China and a U.S. ally. Because of COVID-19 shutdowns, 30 percent of container ships stuck in ports come from China, leading to delays and price increases. China accounts for 18 percent of all the goods the U.S. imports, according to Bank of America. And for computers and electronics, that number rises to 35 percent. In short, Americans might be unwilling to have their lives impacted for so long by a war in a place “they can’t find on a map.”

In fairness to Americans, the vast majority are compassionate and caring, but they also don’t live a life of luxury with time to learn about and focus on a host of issues. They work full time, juggle school and family, and don’t control what the media shows them. And that media is often far more focused on the new, shiny, political football than on explaining long-term issues from faraway places.

Though, the average American can change this. The impact on goods and services during a potential conflict in East Asia will likely command attention for a long time. Taiwan supplies about 50 percent of the semiconductor market, making it almost as vital to the modern economy as an oil-producing Arab state. The media often gives people what they want. So readers should seek out, read, share, and support media coverage that bravely and honestly covers the conflict.

Above all, the public must remain vigilant before and during a war. The average person can’t become inured to the constant drumbeat of chaos and death overseas. The people must maintain moral clarity before the war by acknowledging American mistakes while still recognizing far worse aggression and even genocide from the Chinese regime. If a war starts, they have to remember the shock, fear, and heartbreak from when the war first began and use that as motivation to maintain focus to support our allies, or actively fight, until the regime’s aggression is repulsed.