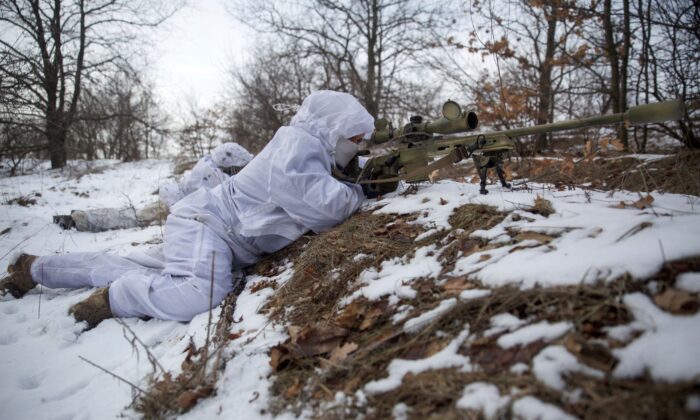 Snipers take part in military exercises at a firing ground of the Ukrainian armed forces in the Donetsk region, Ukraine, on Jan. 17, 2022. (Anna Kudriavtseva/Reuters)
Europe

Tensions in Ukraine ratcheted up a notch Friday as the pro-Russian separatist leader of the self-proclaimed Donetsk People’s Republic (DPR) in eastern Ukraine’s conflicted Donbass region said the situation there was “nearing large-scale war,” adding he had ordered a general military mobilization and evacuation of civilians.

DPR head Denis Pushilin told the state-owned Russian-language news channel Rossiya-24 on Friday that he believes war is about to break out in Donbass, according to Russian news agency Tass.

“Regrettably, yes,” Pushilin said when asked if he believes the situation in the region is heading for “large-scale war.”

Pushilin, along with the head of the self-proclaimed Lugansk People’s Republic, Leonid Pasechnik, have both ordered a general mobilization in the respective conflict zones, Tass reported.

The mobilization orders call on local militia and military units to be in full battle readiness, while prohibiting men aged 18 to 55 from leaving the region.

“I’m urging fellow citizens who are in the reserve to report to military conscription offices,” Pushilin said in a video address on Saturday, adding that he had already signed a decree on general mobilization.

The decree also orders the DPR administration “to shift the economy to work in wartime conditions,” Tass reports, with the series of moves being the latest signs that tensions in Ukraine are growing.

The separatist leadership in Donetsk and Lugansk on Friday both announced evacuations of civilians to Russia, while a senior Russian lawmaker said on Saturday that Moscow “will defend” Russian citizens and “compatriots” in the two regions if danger arises to their lives, though he insisted that “Russia doesn’t want war.”

Western leaders have been skeptical about repeated statements by Russia that it doesn’t want war and isn’t seeking to invade Ukraine.

President Joe Biden said on Friday that U.S. intelligence officials believe Russia will invade Ukraine in the coming days and will target the country’s capital, Kyiv.

Biden added that “as of this moment I’m convinced [Putin]’s made the decision” to invade Ukraine.

Defense Secretary Lloyd Austin backed up Biden’s claim in an interview with ABC News. Asked about the potential for a Russian invasion, Austin replied: “I don’t believe it’s a bluff.”

Incidents of shelling across the line dividing Ukrainian government forces and separatists increased sharply this week, in what the government in Kyiv called a provocation.

Pushilin, in a video message posted on social media on Friday, alleged that Ukraine’s government was planning to go on the offensive in Donbass.

Ukrainian authorities have strongly denied suggestions that Kyiv could launch an offensive in eastern Ukraine.

“We categorically refute Russian disinformation reports on Ukraine’s alleged offensive operations or acts of sabotage in chemical production facilities,” Ukrainian Foreign Minister Dmytro Kuleba wrote on Twitter Friday. “Ukraine does not conduct or plan any such actions in the Donbas. We are fully committed to diplomatic conflict resolution only.”

Kuleba took to Twitter again on Saturday, saying, “Russia must de-escalate the security crisis it created,” while vowing to use “every opportunity to protect Ukraine and avert further escalation.”

Secretary of State Antony Blinken told the Munich Security Conference that, “we see additional forces going to the border including leading-edge forces,” while U.S. ambassador Michael Carpenter also said at another meeting in Europe that the Russian troop buildup was “the most significant military mobilization in Europe since the Second World War.”

More than 100,000 Russian troops have been stationed near areas along Russia’s border with Ukraine for about a month, and U.S. officials said that number has grown to more than 190,000 in recent days.

Biden has said no U.S. troops would be deployed to Ukraine, with the United States and its European partners saying they’re committed to a strategy of diplomacy and deterrence, offering to keep talking with the Kremlin while threatening heavy sanctions in the event of an invasion.