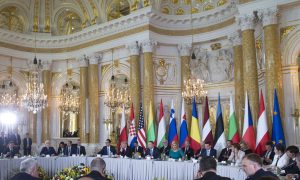 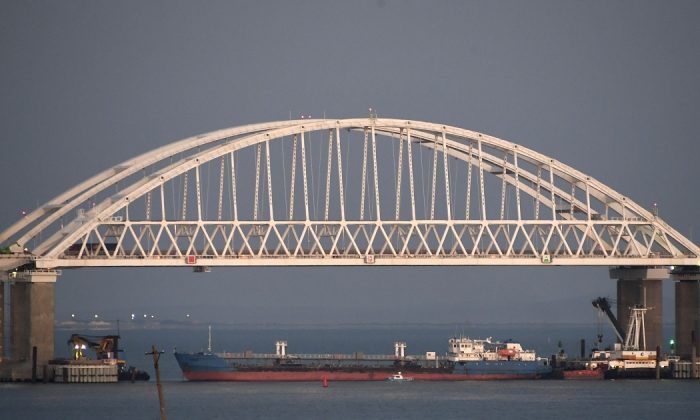 A Russian tanker under the the Kerch bridge blocks the passage to the Kerch Strait near Kerch, Crimea, on Nov. 25, 2018. (AP Photo)
Europe

MOSCOW—Officials in Ukraine said on Thursday, July 25, that they have seized a Russian tanker moored in the Black Sea in a move that could undermine a much-anticipated prisoner swap between the two countries.

The Ukrainian Security Service (SBU) said in a statement that it seized the Russian tanker moored in a Ukrainian Black Sea port on Wednesday. Authorities said that the tanker was used in a Russian operation to block Ukrainian vessels from sailing through the Kerch Strait between the Black Sea and the Sea of Azov in November last year.

Relations between the two former Soviet nations has been strained since Russia’s annexation of Crimea in 2014. https://t.co/qQ4HUFhlVT

Officials both in Russia and Ukraine said earlier this month that they are preparing a major prisoner swap that would include the Ukrainian sailors.

But the move by the SBU, which is still led by an ally of former president Petro Poroshenko, could jeopardize that.

Ukrainian President Volodymyr Zelenskiy’s office did not have an immediate comment on the incident but Russian officials protested the tanker’s seizure, saying that would dampen the chances of the prisoner swap.

“This is very bad news,” Russian Deputy Foreign Minister Grigory Karasin told the state-owned RIA Novosti news agency on Thursday. “Someone in Kiev wants a tough throwback to their own provocation on Nov. 25.”

Ukrainian security services say they have detained a Russian oil tanker in the Ukrainian port of Izmail over its alleged involvement in Nov. 2018 incident between the two countries in the Kerch Strait. https://t.co/AlXBpQ5g43 – @MoscowTimes

Zelenskiy got on the phone with the Russian leader Vladimir Putin earlier this month in the first ever conversation between the two since Zelenskiy took office in May. The Ukrainian president, who was a popular comedian before he won the vote in April, made the release of Ukrainian prisoners in Russia one of the main priorities of his presidency.