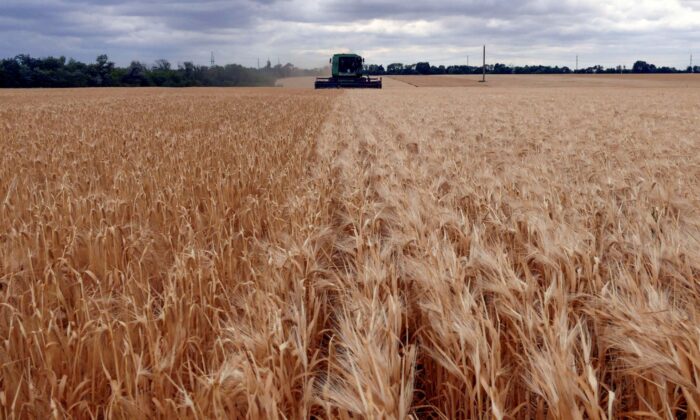 The Ukrainian military said that Russian missiles on July 23 hit the port of Odesa, a major trade hub in Southern Ukraine, just a day after a landmark deal was signed on Friday by Moscow and Kyiv meant to resume grain exports to ease a global food crisis as the Russia–Ukraine war approached the 150th day.

But Turkey’s defense minister, Hulusi Akar, who said he had spoken with Ukrainian authorities, said one missile struck a grain silo and another landed nearby but neither affected loading at Odesa’s docks.

Akar separately told Turkish state-run media Anadolu Agency on July 23: “Russians told us that they had absolutely nothing to do with this attack and that they were examining the affair very closely and in detail.”

Akar told the outlet that it was disturbing that the attack came just a day after the landmark deal on grains export was struck. “The fact that this incident took place right after the agreement we made yesterday regarding the grain shipment has really worried us, and we are disturbed by this,” he said. “However, we continue to fulfill our responsibilities in the agreement.”

He added that Turkey continue to be in contact with both Ukraine and Russia over the incident.

Ukraine and Russia signed a deal on July 22 to restore Ukrainian grain exports out of three Black Sea ports—Odesa, Chernomorsk and Yuzhny—to pre-war levels of 5 million tonnes a month. The deal was mediated by the United Nations and Turkey.

Ukraine has mined waters near its ports as part of its war defences, but under the deal pilots will guide ships along safe channels to and from the three ports. A Joint Coordination Center (JCC) staffed by members of all four parties to the agreement will then monitor ships transiting the Black Sea to Turkey’s Bosphorus Strait and off to world markets. All sides agreed on July 22 there would be no attacks on these entities.

U.N. officials had said on July 22 they hoped the agreement would be operational in a few weeks. It was not yet clear if that would still be possible after the July 23 hit on Odesa.

The Russian Black Sea fleet’s blockade of Ukrainian ports since the start of the war in February has trapped tens of millions of tonnes of grain and stranded many ships.

The blockade has worsened bottlenecks in the global supply chain, and, along with Western sanctions on Russia, contributed to the food and energy price inflation.

Russia and Ukraine are major global wheat suppliers, and the war sent food prices soaring. The global food crisis has pushed some 47 million people into “acute hunger,” according to the U.N. World Food Programme.

The July 22 deal was seen as crucial to easing supply chain pressures and staving off soaring global food and energy prices. It was intended to avert famine in poorer nations by injecting more wheat, sunflower oil, fertilizer and other products into world markets including for humanitarian needs, partly at lower prices.

Moscow has said it is not responsible for the food crisis. It has blamed Western sanctions for slowing its food and fertilizer exports, and blamed Ukraine for mining the approaches to its ports.

Other Officials Blame Russia Over Attack

Ukraine foreign ministry spokesperson Oleg Nikolenko denounced the strikes on Odesa as disrespectful to Turkey and the United Nations, the parties that brokered the deal. He said on Facebook that “the Russian missile is [Russian President] Vladimir Putin’s spit in the face” of Guterres and Turkish President Tayyip Erdogan.

U.N. Secretary-General Antonio Guterres said he “unequivocally condemns” condemned the strikes on Odesa, a spokesperson said, adding: “Full implementation [of the grain export deal] by the Russian Federation, Ukraine and Turkey is imperative.”

U.S. Secretary of State Antony Blinken also condemned the attack. He wrote on Twitter that the attack “undermines the effort to bring food to the hungry and the credibility of Russia’s commitments to the deal finalized yesterday to allow Ukrainian exports.”

“Russia bears responsibility for deepening the global food crisis and must stop its aggression and fully implement the deal to which it has agreed,” he said.

President Volodymyr Zelenskyy, in a response to the attack, said in his nightly video address: “The invaders can no longer deceive anyone.”

“If anyone in the world could have said before this that some kind of dialogue with Russia, some kind of agreements, would be necessary, look at what is happening,” he added, promising that he would try his best to obtain air defense systems that can to shoot down missiles.