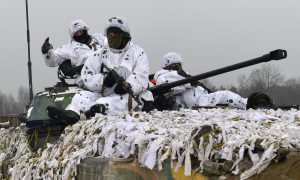 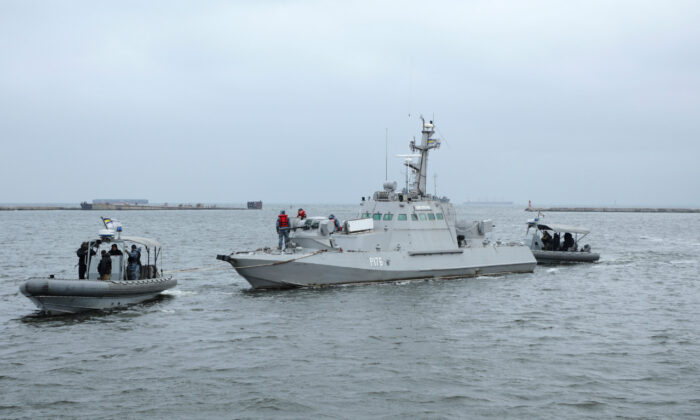 Ukrainian servicemen tug the vessel Nikopol, one of three Ukraine naval ships captured in the Kerch Strait in November 2018 and then returned by Russia, in the port of Ochakiv, Ukraine, on Nov. 20, 2019. (Oleg Novikov/Reuters)
Europe

Ukrainian naval ships, captured by Russia last November and released on Tuesday to be returned to Ukraine, are in very poor condition and cannot move independently, the commander of Ukraine’s navy said on Wednesday.

Russia seized three ships in the Kerch Strait and captured 24 crew members in November 2018. The ships—two small Ukrainian armored artillery vessels and a tug boat—were sailing from the Black Sea port of Odessa to Mariupol in the Sea of Azov. When they reached the Kerch Strait, Russian forces intercepted them and opened fire, wounding several sailors.

Russia claimed it temporarily closed the area and the ships illegally entered its territorial waters. Russian border guards tried to contact the Ukrainian ships but they did not respond. Ukraine denied any violation of law, stating that the waters are a shared territory under a 2003 treaty, and that it had also notified Russia in advance about its plans to move the ships through the strait.

The dispute has caused friction between Moscow and the West, which has backed the Ukrainian position that the ships should not have been held. The Kerch Strait, which separates mainland Russia from Crimea, is the only outlet from the Azov Sea, where Ukraine has major cities and ports, and Ukraine says it cannot be denied access.

Ukraine, the European Union, and the United States do not recognize the 2014 annexation of Crimea by Russia.

In May this year the United Nations maritime tribunal ruled Russia must release the seized vessels and sailors, but Russia did not comply.

The sailors were finally released as a part of prisoner exchange between Russia and Ukraine in September.

Ukrainian navy chief Vice Admiral Ihor Voronchenko told Ukrainian television’s “4th channel” on Nov. 20 the ships had not yet reached Ukrainian territorial waters because they were being towed so slowly.

“They cannot sail on their own. The Russians ruined them—even took off lamps, power outlets, and toilets. We will show the whole world the Russian barbarism towards them,” Voronchenko said.

Radio Free Europe reported that Russia’s Foreign Ministry had returned the ships after “investigators fully studied them” in an ongoing probe “on illegal border crossing” and “their further presence in Russia is unnecessary.”

Ukrainian President Volodymyr Zelensky was due to greet the ships in the port of Ochakiv in the southern Mykolayiv region.

The release of the ships took place ahead of a four-way peace summit also called Normandy Four on eastern Ukraine set for Dec. 9 in Paris. The leaders of France, Germany, Russia, and Ukraine will meet in an attempt to advance efforts for a peaceful resolution to the conflict that has killed more than 13,000 people in five years.