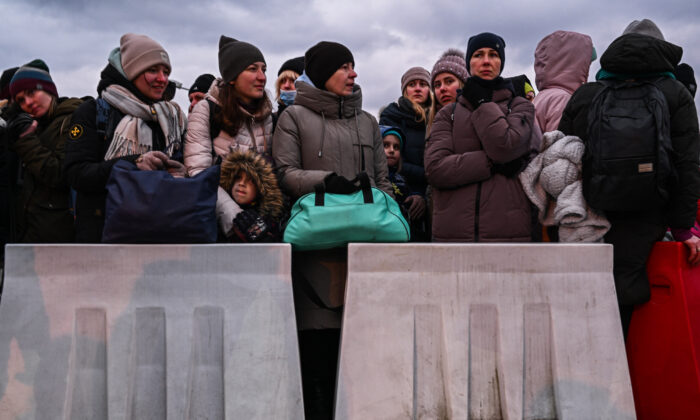 People who fled the war in Ukraine wait in line to board a bus behind removable barriers as police officers and Polish territorial defense soldiers help to manage the crowd after crossing the Polish-Ukrainian border in Medyka, Poland, on March 8, 2022. (Omar Marques/Getty Images)
Russia-Ukraine War

Ukrainian authorities have announced a temporary ceasefire along six evacuation routes for civilians in besieged or occupied cities, though a cloud of uncertainty hangs over the arrangement as prior efforts at securing the safety of humanitarian corridors have mostly failed, with Russia and Ukraine trading blame.

Ukraine’s Deputy Prime Minister Iryna Vereshchuk said in a video message on Telegram on Wednesday that Russian authorities had confirmed the ceasefire along six evacuation routes, and that word of the arrangement had been conveyed to the International Committee of the Red Cross (ICRC).

The ceasefire is to last from 9 a.m.–9 p.m. local time on March 9, Vereshchuk said. The humanitarian corridors lead out of Sumy in the northeast, Mariupol on the Azov Sea coast, Enerhodar in the south, Volnovakha in the southeast, Izyum in the east, and several towns around the capital Kyiv, she said.

Prior ceasefire efforts around humanitarian corridors have mostly been unsuccessful, with only one evacuation route open out of Sumy. Around 5,000 people were evacuated out of Sumy on Tuesday.

The head of the ICRS said Wednesday he hopes the current thrust to establish humanitarian corridors will be successful after earlier efforts bore little fruit.

Peter Maurer, president of the ICRC, told Germany’s Deutschlandfunk radio on Wednesday that his organization has been working for days to bring the warring parties together and encourage them to hold detailed military-to-military talks on enabling civilians to flee.

Maurer said it’s important that agreements succeed “because the military units stand close to each other and the smallest uncertainty, as we have seen in recent days, leads instantly to exchanges of fire, and that makes the escape routes impossible.”

A series of local ceasefires to let civilians evacuate leave have collapsed since efforts began on Saturday to get them operating safely.

Former NATO Gen. Egon Ramms told German media outlet ARD that, while he hopes the ceasefires would hold, a prerequisite is for both sides to cease hostilities.

Ramms said that experience with ceasefires shows “that often both sides are not equally informed” and so one side unwittingly continues to fight.

“Then the other side fires back. And then such a humanitarian corridor has failed accordingly, both for aid and for people who want to flee,” he told the outlet.

More than 2 million people have fled Ukraine since Russian President Vladimir Putin ordered what he described as a “special military operation” to disarm its neighbor and dislodge leaders it calls “neo-Nazis.”

Kyiv and its Western allies dismiss that as a groundless pretext for an unprovoked war of aggression against a sovereign and democratic nation.

Meanwhile, as hostilities entered their 14th day on Wednesday, the fate of a much-discussed potential transfer of Polish fighter jets to Ukraine remained in limbo.

Poland, which is wary of being seen as engaging in the conflict, has offered to transfer its fleet of MiG-29s to U.S. custody at a U.S./NATO base in Germany for further disposition by the United States. But the Pentagon threw cold water on the proposal, with Department of Defense spokesperson John Kirby describing it as untenable.

“The prospect of fighter jets ‘at the disposal of the Government of the United States of America’ departing from a U.S./NATO base in Germany to fly into airspace that is contested with Russia over Ukraine raises serious concerns for the entire NATO alliance,” Kirby said in a statement.

“It is simply not clear to us that there is a substantive rationale for it. We will continue to consult with Poland and our other NATO allies about this issue and the difficult logistical challenges it presents, but we do not believe Poland’s proposal is a tenable one,” he added.

Kirby added that the decision whether to transfer the MiGs to Ukraine was up to the Polish government.

Polish authorities, however, want the jet transfer to be done under the auspices of NATO and to have the unanimous backing of all the allies.

Ukrainian President Volodymyr Zelensky on Wednesday called for a faster resolution of the uncertainty surrounding the transfer of the MiGs.

Zelensky described the hold-up as one of “logistics” and a “technical issue,” while calling for it to be resolved “immediately.”

“We are at war! This is not ping pong! It’s about human lives! We once again ask you to resolve this quickly, send us the aircraft,” he said in a video message on Wednesday.

Mimi Nguyen-Ly and The Associated Press contributed to this report.