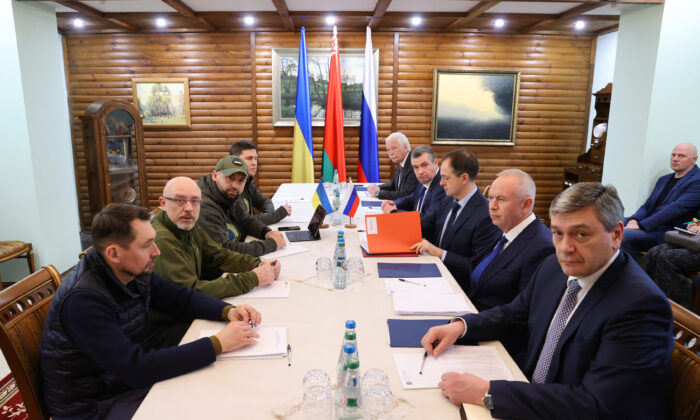 The third round of talks between Russia and Ukraine concluded with “small” and “positive” developments, said a Ukrainian negotiator on March 7, 2022. (Maxim Guchek/AFP via Getty Images)
Russia-Ukraine War

The third round of talks between Russia and Ukraine concluded with “small” and “positive” developments, said a Ukrainian negotiator on Monday.

“The third round of negotiations has ended. There are small positive subductions in improving the logistics of humanitarian corridors,” Mikhail Podolyak, adviser to President Volodymyr Zelensky, wrote on Twitter Monday. There were no concrete agreements toward ending the conflict.

“Intensive consultations have continued on the basic political bloc of the regulations, along with a cease-fire and security guarantees,” he added after the talks kicked off in Brest, Belarus, earlier in the day.

Russia’s top negotiator, Vladimir Medinsky, told news outlets that “hopefully next time we can take a bigger step forward,” adding that it “is too early to talk about something positive.”

Two previous talks yielded few developments, although the second round of talks produced an agreement between both sides to provide humanitarian and evacuation corridors for civilians.

Russia’s and Ukraine’s respective foreign ministers are also slated to meet in Turkey on Thursday, according to Turkey’s top diplomat, Mevlut Cavusoglu.

“Hope this step will lead to peace and stability,” Cavusoglu said on Twitter on Monday, saying that the talks will take place in Antalya, Turkey, which has good relations with both Kyiv and Moscow and is a longtime member of NATO.

Meanwhile, Podolyak accused Russian forces of bombarding and targeting civilian areas, including hundreds of schools, dozens of hospitals, and more than 1,500 residential areas. But Russian officials since the start of the conflict have said that their forces are hitting legitimate military targets and accuse Ukrainian military forces and nationalist forces of hiding in civilian areas.

Kremlin spokesman Dmitry Peskov told Reuters that Russia’s military offensive against Ukraine will stop if Zelensky’s government meets Moscow’s conditions. Russia wants Ukraine to refrain from joining NATO and be a neutral state, acknowledge Crimea as a part of Russia, and recognize the Lugansk and Donetsk separatist regions as independent states.

“They should make amendments to their constitution according to which Ukraine would reject any aims to enter any bloc,” Peskov told the newswire service late on Monday, adding that Russia isn’t attempting to make any further territorial claims on Ukraine.

Over the weekend, efforts to set up a humanitarian corridor in some Ukrainian cities, including hard-hit Mariupol, fell apart due to fighting. Both Ukrainian and Russian officials accused one another of breaking ceasefire agreements.

The United Nations’ refugee agency said the invasion, which started Feb. 24, has left hundreds of civilians dead and has driven more than 1.7 million to flee the country.

On Monday, Zelensky called for harsher punitive measures against Moscow, including a global boycott of Russian oil, which is a key part of its economy.

“If [Russia] doesn’t want to abide by civilized rules, then they shouldn’t receive goods and services from civilization,” he said in a video address posted online. But White House press secretary Jen Psaki on Monday afternoon said there was “no decision” yet on a possible Russian oil embargo.