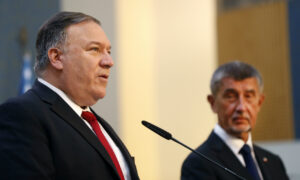 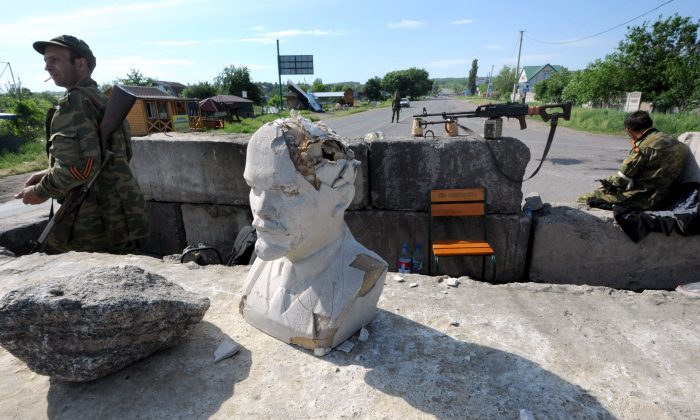 Armed pro-Russian militants guard a check-point on which is placed a bust of Lenin in the village of Semenovka, near the eastern Ukrainian city of Slavyansk, on May 22, 2014. Separatist rebels killed at least nine Ukrainian soldiers in the restive east on May 22, dealing a heavy blow to the beleaguered government just three days before a crunch presidential poll. AFP PHOTO/ VIKTOR DRACHEV (Photo credit should read VIKTOR DRACHEV/AFP/Getty Images)
Europe

Ukraine has removed all 1,320 statues of Vladimir Lenin, the first Soviet dictator, following a government campaign to remove its Soviet-era symbols.

In every village, town, and city controlled by Kiev, monuments to the communist leader—considered a dictator by many—were removed. The initiative was made law by President Petro Poroshenko in May 2015, according to The Times of London on Aug. 18.

Some streets were renamed, including Lenin Street in Zakarpattia, which was later renamed to Lennon Street in a tribute to Beatles singer John Lennon, the Telegraph reported.

Another 1,069 Soviet-era monuments have also been removed, said Volodymyr Viatrovych, director of the Institute of National Remembrance.

“Lenin is no more in cities in Ukrainian-controlled territory,” Vyatrovych said.

The toppling of the Lenin statues began when protesters took down a monument in Kiev during the Euromaidan demonstrations in 2014. Later, a 2015 law banned communist and Nazi symbols.

In the United States, amid calls to remove statues of Confederate soldiers and generals, there have been calls to remove the statue of Lenin in Seattle’s Fremont neighborhood. Seattle Mayor Ed Murray, a Democrat, called for the removal of the Lenin statue as well as Confederate statues, saying they represent “historic injustices,” the Seattle Times reported.

Some historians have noted that Lenin’s policies helped trigger the Povolzhye famine, which started in 1921 and ran until 1922, leaving millions dead and even more affected.

The famine was so bad that peasants were driven to do the unthinkable: cannibalism.

The Red Cross quoted a 1921 Soviet police report as saying, “Right now [the peasants] are digging up bodies in order to eat them.”

Some 5 million died in the Povolzhye famine.

Aid workers who arrived from the United States and Europe in 1921 during the height of the famine noted “ghastly rumours about sausages prepared with human corpses, though officially contradicted, were common. In the market, among rough huckstresses swearing at each other, one heard threats to make sausages of a person.”

As Lenin himself said, “Let the peasants starve.”

At the time, according to historical accounts, Lenin instructed guards to take food from the poor. His Bolsheviks believed peasants were trying to undermine the war effort by taking their food away from the army.

As the Red Cross noted:

“Thousands of villages were abandoned by their wretched inhabitants, who went scavenging for food wherever they could hope to find it. They survived on grass, clumps of earth, domestic animals… and even human flesh. In June 1921 Lenin acknowledged the looming tragedy, and the writer [Maxim] Gorki appealed to the world for help. The leadership of the Soviet Red Cross sent a message to Geneva underlining the urgency of the situation.”


Another said, “Families were killing and devouring fathers, grandfathers and children.”

Lenin died in 1924 shortly after the famine, leaving Joseph Stalin to head the communist party.

If they returned, Lenin charged, they would be shot.

Angry by how long it was taking to remove the intellectuals, Lenin, in June 1922, wrote to Stalin about removing the writers: “We’re going to cleanse Russia once and for all.” He later added, “All of them must be chucked out of Russia. It should be done all at once. By the time the [Socialist Revolutionaries] trial is over, not later, and with no explanation of motives—leave, gentlemen!”