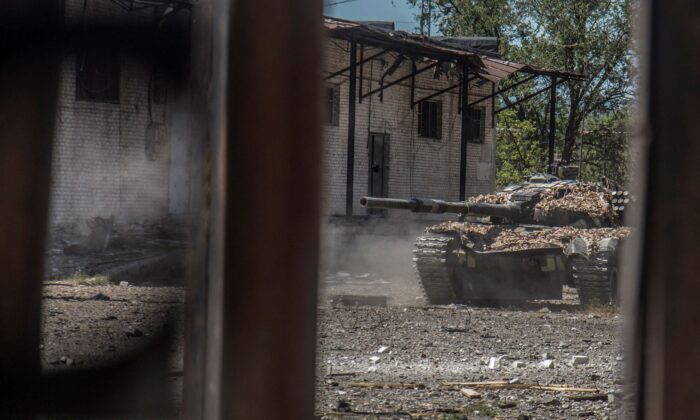 A tank of the Ukrainian Armed Forces is seen in the industrial area of the city of Sievierodonetsk, Ukraine, on June 20, 2022. (Oleksandr Ratushniak/Reuters)
Russia-Ukraine War

Ukraine Pushes to Retake All Territory From Russia, Calls for Even More Western Arms

Ukraine’s government on Tuesday said it aims to take back all of its territories after pushing back Russian forces in the northeastern portion of the country in a rapid offensive.

In a video address late on Monday, Ukrainian President Volodymyr Zelenskyy called on the West and United States to again provide weapons systems. The United States, in particular, has already given over $13.5 billion in military aid to the country since Feb. 24.

“From the beginning of September until today, our warriors have already liberated more than 6,000 square kilometers of the territory of Ukraine–in the east and south,” he said. “The movement of our troops continues.” The country on Sunday marked the 200th day of the conflict.

Weapons systems need to be given to Ukraine from the West, he said, to “strengthen cooperation to defeat” Russian forces in the country.

Since Russia’s Feb. 24 invasion, Washington and its allies have provided Ukraine with billions of dollars in weapons that Kyiv says have helped limit Moscow’s gains. Russian forces control around a fifth of the country in the south and east but Ukraine is now on the offensive in both areas.

The Institute for the Study of War think tank said that Ukrainian forces “are continuing to make impactful gains” and that they are “steadily degrading the morale and combat capabilities of Russian forces,” according to a Monday update.

Fighting was still raging in the northeastern Kharkiv region, Deputy Defence Minister Hanna Malyar told Reuters on Tuesday, saying Ukraine’s forces were making good progress because they are highly motivated and their operation is well planned.

“The aim is to liberate the Kharkiv region and beyond … all the territories occupied by the Russian Federation,” Deputy Defence Minister Hanna Malyar told Reuters.

Secretary of State Antony Blinken told reporters Monday that Ukrainian forces had made “significant progress” in recent days but said it’s too early to make predictions.

“The Russians maintain very significant forces in Ukraine as well as equipment and arms and munitions. They continue to use it indiscriminately against not just the Ukrainian armed forces but civilians and civilian infrastructure as we’ve seen,” Blinken said.

Russia’s Ministry of Defense, meanwhile, said Tuesday that its forces killed or injured more than 800 Ukrainian forces and “foreign fighters” in the past 24 hours, according to state-run media.

“As a result of the strikes, the daily losses of Ukrainian servicemen and foreign fighters exceeded 800 people killed and injured,” the ministry stated.