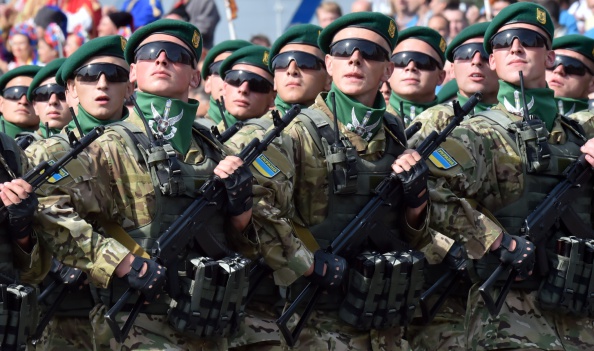 Ukrainian forces parade during a military ceremony marking the 23rd anniversary of Ukraine's independence in the center of Kiev on August 24, 2014. Ukraine's President Petro Poroshenko on August 24 decried Russian 'aggression' as Kiev staged a symbolic Independence Day parade while battling pro-Moscow rebels in the east of the country. (SERGEI SUPINSKY/AFP/Getty Images)
Europe

President Petro Poroshenko made his pledge to spend an extra 40 billion hryvnia ($3 billion) by 2017 during a speech marking Ukraine’s independence from the Soviet Union in 1991.

More than 20,000 people, many waving the country’s blue and yellow flag or donning traditional embroidered shirts, gathered to hear Poroshenko and watch an ostentatious military display in Kiev’s Independence Square, where months of protests earlier this year ended in the ouster of the country’s previous pro-Russian president. During the parade, tanks and other armored vehicles rumbled past in a show of strength.

“It is clear that in the foreseeable future there will always, unfortunately, be the threat of war,” Poroshenko said. “And we not only have to learn to live with that. We must always be prepared to defend our independence.”

Poroshenko warned that Ukraine has repeatedly suffered threats and actual invasion from its eastern border with Russia “and we have typically not expected it.”

Responding to criticisms that army equipment was being tied up Sunday in ceremonies, he also told the crowd that the troops, tanks and other weaponry would head immediately east after the show.

His plans for extra spending would represent an additional 50 percent on top of Ukraine’s current defense spending, projected to reach $1.5 billion this year. Ukrainian military leaders have pleaded for extra resources as they face a potentially protracted fight against separatists in the country’s Russian-speaking industrial east.

Analysts say the Ukrainian army mounted an uncoordinated, ill-equipped campaign against the rebels as they seized control of dozens of eastern cities in April and May. More recently, Kiev’s troops have routed the insurgents in much of the region and encircled them in Luhansk and Donetsk, the regional capitals. The United Nations says more than 2,000 people have been killed in the fighting.