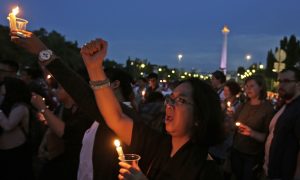 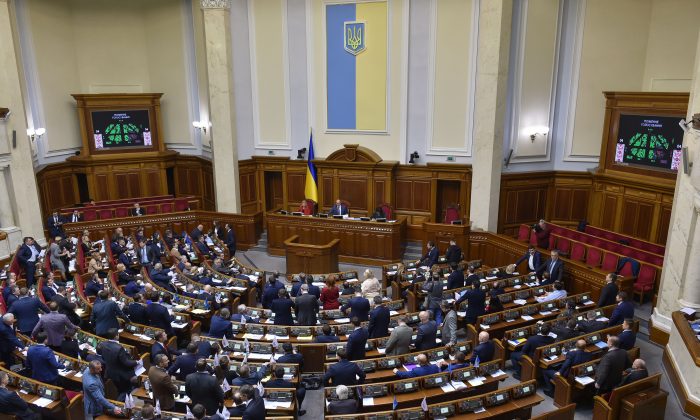 Ukrainian members of parliament of the Verkhovna Rada, the Supreme Council of Ukraine, on Dec. 6, 2018, (Genya Savilova/AFP/Getty Images)
Europe

Pedophiles can be chemically castrated as a punishment in Ukraine under a new law passed on July 11 by the national parliament.

According to the government-run news agency, Ukrinform, chemical castration has been added to the criminal code.

Chemical castration can be a condition of parole in a handful of U.S. states in very limited circumstances.

Poland has a similar law, passed in 2010, which allows courts to force chemical castration on men upon release from prison if they have been convicted of raping children or family members.

The new Ukraine law stipulates that the castration—which is not permanent and does not cause sterility—can be used as a “punishment.”

It is not clear whether how this new punishment would operate alongside sentencing, release, or parole and the exact chemical cocktail to be used has not been specified.

The country’s legal code had to be amended to add chemical castration to the list of 12 legal forms of punishment.

According to the Daily Mail, Radical Party leader Oleg Lyashko, who put forward the legislation said, “Ukrainian law does not have a life term or death penalty for sex crimes against children. And it is very unlikely that the rapist would not be back to his “business” again after release from jail.”

Last month Alabama Gov. Kay Ivey (R) signed a bill into law that requires child sex offenders to be chemically castrated as a condition of parole.

The House Bill 379 (HB379) was passed by the Alabama State Legislature in early June, calling for mandatory “chemical castration in addition to any other penalty or condition prescribed by law.”

The sex offenders would also have to pay for their own chemical castration before being released from state custody and they “may not be denied parole based solely on his or her inability to pay for the costs associated with the treatment.”

The chemical castration procedure involves taking a drug, “medroxyprogesterone acetate or its chemical equivalent” either by tablets or injection, to suppress or block the body from producing the hormone testosterone.

Rep. Steve Hurst (R-Munford), who introduced the bill, had proposed similar bills in the past for more than a decade. The bill passed on May 30.

“I’m very serious,” Hurst said, according to AL.com. “Not only did I want it to pass, I want to follow it on through to the future where we can try to improve it. One of the ultimate goals that I want to do is for us to track it and to make sure what medication works for what individuals.”

Dr. Frederick Berlin, founder of a sexual disorders clinic at John Hopkins University, said in a 2016 interview with CBS News that in some instances, lowering testosterone levels can help reduce libido and sexual urges, and may have an effect on recidivism.

But not all sex offenses are sexually motivated. Berlin explained: “There are many sex offenders who aren’t driven by intense sexual urges. Some of these folks have other mental health issues, so it could just lull us into a false sense of security.”

Other states have also considered chemical castration for child predators. In California, a bill was passed in the 1990s for repeat child sex offenders. Similar measures exist in other states, including Florida, Louisiana, Montana, Oregon, and Texas.