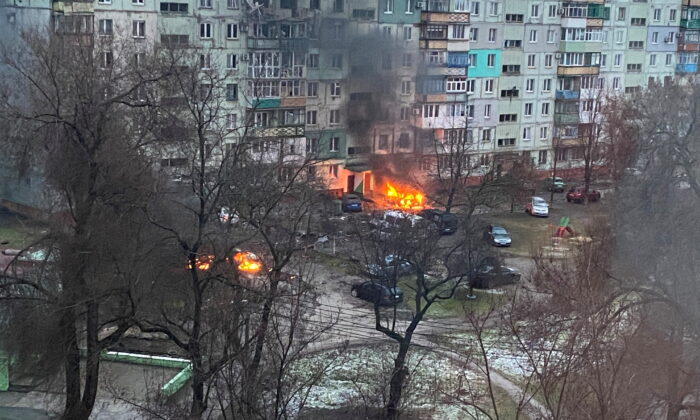 Fire is seen in Mariupol at a residential area after shelling amid Russia's invasion of Ukraine, on March 3, 2022. Twitter (@AyBurlachenko via Reuters)
Russia-Ukraine War

An attempt to evacuate civilians from the Ukrainian city of Mariupol was halted for a second time this weekend, according to a Ukrainian government official, who alleged that Russian attacks stopped plans for a humanitarian corridor.

“There can be no ‘green corridors’ because only the sick brain of the Russians decides when to start shooting and at whom,“ Interior Ministry adviser Anton Gerashchenko via on Telegram on Sunday.

The International Committee of the Red Cross (ICRC) also appeared to confirm that evacuation efforts from Mariupol had failed.

“Today’s attempt to start evacuating an estimated 200,000 people has failed. The failed attempts underscore the absence of a detailed and functioning agreement between parties to the conflict,” the ICRC wrote on Twitter. The Red Cross appeared to blame both sides for not coming to a clear agreement on the evacuation corridors.

“People in Mariupol and in other places across Ukraine are living in desperate situations,” the ICRC wrote in its Twitter thread before adding: “They must be protected at all times. They are not a target. People urgently need water, food, shelter. The basics of life. We need safety guarantees to be able to bring them aid.”

The Russian Ministry of Defense wrote earlier Saturday that it would stop bombarding Mariupol and Volnovakha. But after the announcement was made, Ukrainian authorities said Moscow started the bombing again.

“Due to the fact that the Russians are not observing the ceasefire regime and continue shelling Mariupol and its outskirts, the evacuation of the population has been postponed for security reasons,” the governor of the Donetsk region, Pavlo Kyrylenko, wrote on Twitter.

The breakaway Donetsk separatist region said that safe passage from Mariupol, located along the Azov Sea, and Volnovakha was opened Sunday morning. The separatist Donetsk People’s Republic has claimed Mariupol as its territory since 2014 following the color revolution that saw Ukraine’s government overthrown.

A spokesman for the separatists, Eduard Basurin, told RT that Ukrainian forces would not “guarantee” the observation of the ceasefire in the area on Sunday, while the Russian Ministry of Defense alleged that Ukrainian “nationalist” forces prevented civilians from leaving Mariupol.

Via state-run Russian media, the Donetsk separatists said that Ukrainian militants allegedly shot at civilians who are trying to leave Mariupol. “According to preliminary information, two civilians were killed and four were injured,” the statement said.

The Epoch Times could not independently verify those claims.

A similar evacuation plan was thwarted by shelling on Saturday.

Russian and Ukrainian delegations have held two rounds of peace talks since the conflict started on Feb. 24. The second round of talks last week produced an agreement to set up humanitarian and evacuation corridors, while a third round is scheduled for Monday, officials have said.

On Saturday, Mariupol mayor Vadym Boichenko stressed the urgency of getting residents, who have been sheltering in basements, out of the line of fire. Russia’s bombardment of the city for the previous six days has been so heavy emergency services are not able to collect the bodies of those killed, he told Reuters.