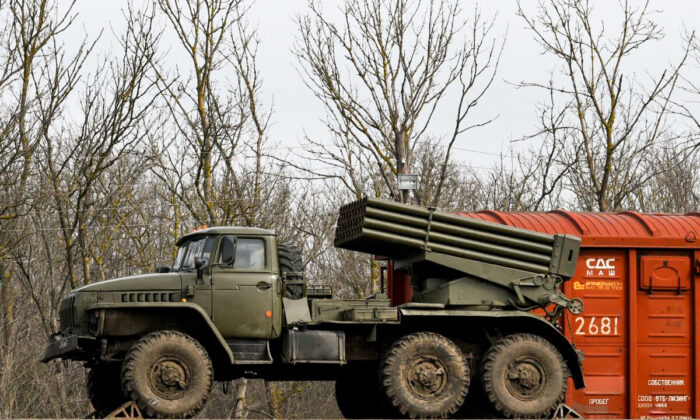 Russian military vehicles are seen loaded on train platforms some 50 kilometers (30 miles) off the border with the self-proclaimed Donetsk People's Republic in Russia's southern Rostov region on Feb. 23, 2022. (Stringer/AFP via Getty Images)
Europe

Ukraine has shifted to a war footing, imposing a nationwide state of emergency, urging all of its citizens to leave Russia immediately, and introducing conscription of reservists as the crisis deepens.

Ukraine’s National Security and Defense Council backed imposing a state of emergency on the morning of Feb. 23 on all of the country’s territory, apart from the conflict-stricken Donetsk and Luhansk regions, where it has been in place for eight years as Ukrainian forces have battled pro-Russian separatists.

Lawmakers approved a declaration later in the day that imposed the state of emergency.

Oleksiy Danilov, the country’s top security chief, said at a briefing earlier in the day that the measures introduced by the declaration would include beefing up security at key locations, with stricter curbs in high-risk areas such as eastern Ukraine, along the country’s border with Belarus and Russia and in Russian-occupied Crimea.

Separately, Ukraine’s Parliament voted on Feb. 23 to approve a draft law that allows Ukrainians to carry firearms and act in self-defense.

“The adoption of this law is fully in the interests of the state and society,” the authors of the draft law said in a note, stating that the measure was needed because of “existing threats and dangers for the citizens of Ukraine.”

Ukraine has also called on all of its estimated 3 million citizens living in Russia to leave immediately.

The first wave of reservists also has been called up, with Ukrainian President Volodymyr Zelensky announcing conscription of reservists aged 18 to 60 on Feb. 22, although he ruled out a general military mobilization.

Tensions have escalated in the region after Russian President Vladimir Putin declared Donetsk and Luhansk independent states and said Russia was moving its troops there, ostensibly as peacekeepers.

Western leaders have dismissed the claim that Russian forces are in Ukraine to help maintain peace, accusing Putin of orchestrating a territorial grab. They say he’s likely to use a false flag operation as a pretext for a deeper incursion into Ukraine—laying siege to Kyiv, toppling the government, and imposing a Moscow-friendly regime.

Russia has denied plans for an invasion, instead framing its actions as moves to protect ethnic Russians living in Ukraine, with Putin accusing Ukrainian forces and their proxies of “genocide” in eastern Ukraine, an explosive claim dismissed by Western officials and analysts as propaganda meant to justify an invasion.

Pro-Russian separatists have controlled parts of the Donetsk and Luhansk districts, collectively known as the Donbas, since 2014.

The U.N. has estimated that about 14,000 people have been killed in eastern Ukraine over the past eight years, including at least 3,400 civilians.

Update: This article has been updated to reflect the approval of a declaration imposing the state of emergency.