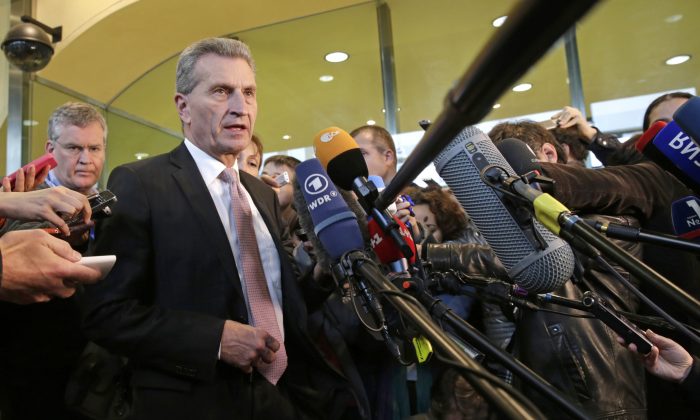 EU Commissioner for Energy Guenther Oettinger addresses the media at the European Commission headquarters in Brussels, Wednesday, Oct. 29, 2014. The European Union’s energy chief is hoping Wednesday’s negotiations between Ukraine and Russia will assure the breakthrough needed to guarantee that Russian gas will continue to flow to Ukraine and, by extension, parts of the EU this winter. (AP Photo/Yves Logghe)
Europe

BRUSSELS—Moscow and Kiev on Thursday clinched a deal that will guarantee that Russian gas exports flows into Ukraine throughout the winter despite their intense rivalry over the fighting in eastern Ukraine.

In a signing ceremony following protracted negotiations, the two sides promised to get the gas flowing into Ukraine again after a long and bitter dispute over payments.

European Union energy chief Guenther Oettinger said that “we can guarantee a security of supply over the winter,” not only for Ukraine but also for the EU nations closest to the region that stood to suffer should the conflict worsen.

“There is now no reason for people in Europe to stay cold this winter,” he said.

The agreement long hinged on the question whether Ukraine was in a position to come up with the necessary cash to pay for the gas. “Yes, they are,” a confident Oettinger said.

He said the $4.6 billion deal should extend to the spring.

Oettinger said it was “perhaps first glimmer of a relaxation in the relations between neighbors.”

Ukrainian Prime Minister Arseniy Yatsenyuk said the amount his government would pay for Russian gas would fall in line with global oil prices, which have tumbled in recent weeks.

Yatsenyuk said at a Cabinet meeting in Kiev that Ukraine could pay $365 per 1,000 cubic meters from the start of next year, down from the $385 rate agreed earlier this month. He said that figure may be adjusted downward to $378 until the end of the year.

Russian President Vladimir Putin and his Ukrainian counterpart, Petro Poroshenko, agreed earlier this month on the broad outline of a deal, but financial issues, centering on payment guarantees for Moscow, have since bogged down talks.

But with each week, the need for a resolution becomes more pressing, since winter is fast approaching in Ukraine, where temperatures often sink below freezing for days.

Russia cut off gas supplies to Ukraine in June after disputes over Russia’s annexation of Crimea in March. Ukraine since then has been relying on gas transfers from other European countries and its own reserves.

EU Commission President Jose Manuel Barroso conferred “a number of times” Wednesday with Poroshenko in Kiev, stressing that “an agreement was within reach,” a Commission statement said.

From The Associated Press. AP writer Peter Leonard in Kiev, Ukraine, contributed to this report.