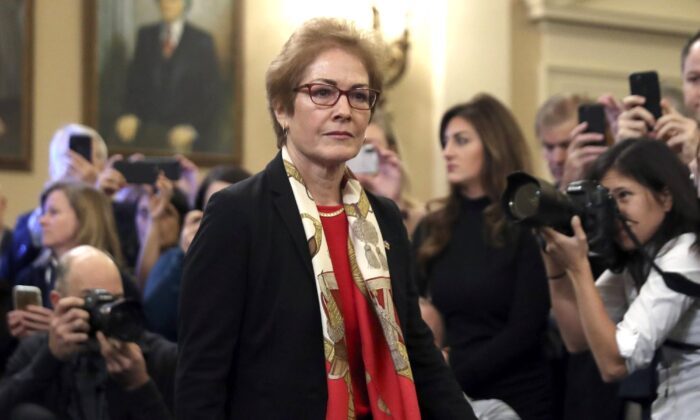 Ukraine Investigating Reports of Surveillance of Former US Ambassador Yovanovitch

Ukraine’s interior ministry announced it is opening a criminal investigation into the possible illegal surveillance of former U.S. Ambassador to Ukraine Marie Yovanovitch, who was a witness during the impeachment inquiry against President Donald Trump.

The Ministry of Interior Affairs wrote on Twitter that it is conducting the investigation in light of “materials published by investigators of the House of Representatives” in recent days about the “possible illegal surveillance” of Yovanovitch.

The ministry wrote in a statement that while Ukraine has an official position to not interfere in U.S. domestic affairs, the published records contain a “possible violation of the legislation of Ukraine and the Vienna Convention on Diplomatic Relations, which protects the rights of a diplomat in the territory of another country.”

“Our goal is to investigate whether there were any violations of Ukrainian and international laws,” the statement said, adding that it will determine if the messages were “just bravado and fake talk in an informal conversation between two U.S. citizens.”

“After analyzing these materials, the National Police of Ukraine upon their publication started criminal proceedings under part 2 of Art. 163 (Violation of the secrecy of correspondence, telephone conversations, telegraph or other correspondence) and part 1 of Art. 182 (Unlawful collection, storage, use of confidential information about a person, violation of privacy) of the Criminal Code of Ukraine.”

The announcement came days after communications regarding Rudy Giuliani’s associate Lev Parnas were released. According to ABC News, which broke the story, Republican congressional candidate Robert Hyde seemed to suggest to Parnas in messages that he had people following Yovanovitch.

In an interview with CBS News on Jan. 15, Giuliani denied having knowledge of any alleged efforts to track Yovanovitch. “I have no idea about allegations of him tracking her,” the former New York mayor told the broadcaster.

Parnas has claimed that he and Giuliani were attempting to get Yovanovitch removed from her position before she was recalled in 2019 by the White House.

“She’s talked to three people. Her phone is off. Computer is off,” Hyde allegedly wrote in one message to Parnas, reported Politico. He also wrote that “she’s next to the embassy” and “not in the embassy.”

When Hyde was asked by Sinclair’s Eric Bolling in an interview on Jan. 15 about whether he “had eyes” on Yovanovitch, he strongly denied the accusation.

“Absolutely not, are you kidding me? I’m a little landscaper from [expletive] Connecticut,” he said.

“That was just colorful, I thought we were playing. I didn’t know he was so serious,” Hyde said, referring to the messages that were released.

In November 2019, Democrats in the House had Yovanovitch testify during the impeachment inquiry into Trump’s dealings with Ukraine and on whether the White House withheld millions of dollars in foreign aid to Kyiv for politically advantageous investigations, which Trump and Ukrainian officials have both denied.