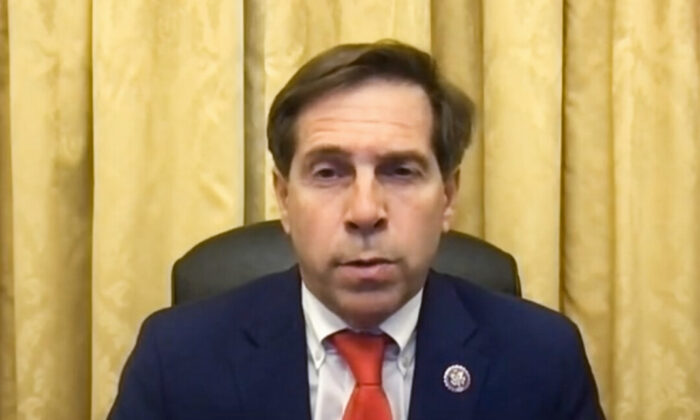 Ukraine Invasion Illustrates That US Must Stay One Step Ahead of Putin: US Congressman

Congressman Chuck Fleischmann (R-Tenn.) said the United States must take up a more aggressive military posture toward Russia in response to the invasion of Ukraine and the Kremlin’s threats of using nuclear weapons against NATO countries.

“We’re going to have to be very, very aggressive … We can never take that rhetoric when it comes to nuclear benignly,” Fleischmann told the host of NTD Capitol Report, Steve Lance in a March 1 interview.

“It’s a dangerous world but a nuclear power such as Russia can and will avail itself of its resources in that regard. We’ve got to be a step ahead,” Fleishmann said.

“They are now saber-rattling in terms of their rhetoric on nuclear policy, which I think is very detrimental and clearly wrong. We haven’t seen that type of bad language from Russia since the waning days of the Cold War.”

On Feb. 24, Russia’s President Vladimir Putin made a veiled nuclear threat to the West, that if NATO countries attempt to stop the invasion of Ukraine, they will face “consequences you have never seen.”

“Well, obviously, I condemn Putin and Russia’s invasion of the sovereign nation of Ukraine. I never could imagine that the attack would be engulfing the entire nation as it had, I would have thought perhaps Putin and the Russians would have tried to go into those two Northeastern provinces where they claimed some sympathizers,” said Fleischmann.

Fleishmann, the ranking member on the Homeland Security Appropriations Subcommittee, said the United States will have to likely scale up its defense in response to the threat by Moscow.

“What will Russia be like under Putin? It’s aggressive, it’s wrong. It’s invading countries, they’ve taken over 20 percent of the country of Georgia in 2008, they never left. So, we’re going to have to be more diligent and vigilant, probably going to have to appropriate more money for defense. I’ve been a strong advocate of that and for that for quite some time.”

Fleischmann expects that the invasion of Ukraine will lead to higher food and energy prices around the world and that the United States in particular should also be concerned about cyber threats by Russia.

“What does that mean for the United States of America? It means that we know now that Russia in the modern era is going to be a dangerous threat. That could be cybersecurity attacks.

“Ukraine produces a tremendous amount of agricultural products: wheat, corn, we have precious metals there. Russia also now is going to be sanctioned severely. [Russia is] a large producer of oil. Even though the United States only gets about 4 percent of its oil from Russia, the fact that it is a commodity and the rest of the world is going to be doing that, we’re going see higher oil prices in the short term, higher energy prices, higher commodity prices for food, it’s not good,” Fleischmann added.

According to logistics expert Nathan Carson, the war in Ukraine, rising global fertilizer costs, and lower than expected grain yields in South America will likely cause grain prices to rise by about 10 percent in the next year due to international market pressures.

“Whether this war is a swift decapitation strike that Russia’s hoping for, or if it’s a prolonged fight, it is definitely going to impact spring planting,” Carson said.

Jackson Elliott contributed to this report.