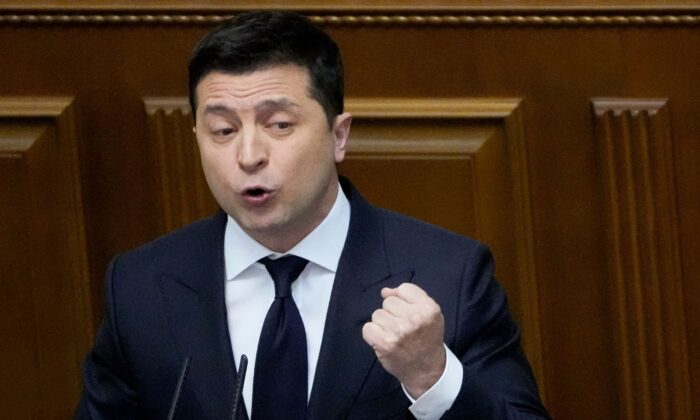 “This morning, President Putin announced a special military operation in Donbas. Russia has attacked our military infrastructure, our border guards,” Zelenskyy said. “Explosions were heard in many cities of Ukraine.”

“There are strikes on military and other important defense facilities, border units are under attack, the situation in the Donbas has degraded,” the ministry said in a statement, referring to the Ukraine’s separatist enclaves that were recognized as “independent” entities by Russian President Vladimir Putin on Monday.

“The Armed Forces of Ukraine, all special and law enforcement agencies of the state are on alert. The National Security and Defense Council is working in an emergency mode,” the ministry added. “Martial law will be imposed.”

The move came shortly after Putin announced a “special military operation” in Ukraine.

In a televised address, Putin said that the operation is intended to “protect civilians and demilitarize Ukraine,” and is a response to threats coming from Ukraine.

Shortly after Putin’s address, explosions were reported in Ukraine’s capital, Kyiv, as well as in other cities, including Kharkiv, Mariupol, and Odessa.

The owner of a local construction company in Odessa, Farid Agayev, told The Epoch Times that his family were woken up at roughly 5 a.m. local time to the sound of an explosion and car alarms going off.

Russia’s ministry of defense issued a statement saying that its military is targeting Ukraine’s military infrastructure.

“Nothing is threatening Ukraine’s civilian population,” it said in a statement.

However by Thursday afternoon, there were already reports of death during the first hours of the Russian assault, including eight civilians and 40 Ukranian soldiers from Russian shelling. The conflict has already cost about 14,000 lives over the past eight years as the Russian-backed separatists occupied the Donbas.

Zelensky urged civilians to stay home where possible. A day earlier, Ukraine imposed a nationwide state of emergency lasting for 30 days, and urged citizens in Russia to leave immediately.

Declaring martial law imposed harder restrictions than a state of emergency, and could include bans on meetings, movements, and political parties.

U.S. President Joe Biden said in the early hours of Thursday morning that he had a phone call with Zelenskyy during which he “condemned this unprovoked and unjustified attack by Russian military forces.”

“Tomorrow, I will be meeting with the Leaders of the G7, and the United States and our Allies and partners will be imposing severe sanctions on Russia,” the president said.

He added, “We will continue to provide support and assistance to Ukraine and the Ukrainian people.”