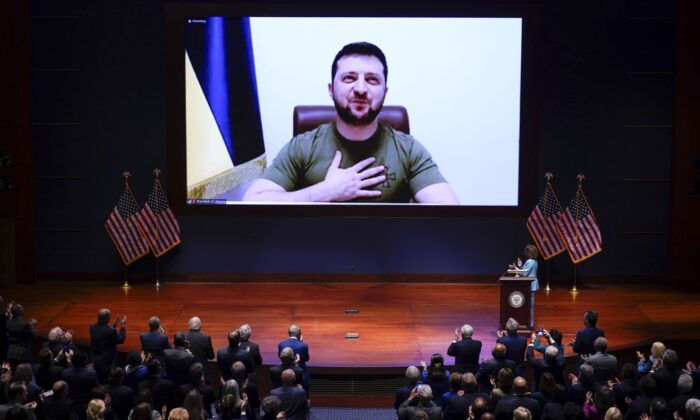 Speaker of the House Nancy Pelosi (D-CA) introduces Ukrainian President Volodymyr Zelensky to speak to the U.S. Congress at the U.S. Capitol on March 16, 2022 in Washington, DC. (J. Scott Applewhite-Pool/Getty Images)
US

Are you an able-bodied person with military experience and knows how to use firearms?

If so, the “Ukraine Foreign Legion” wants you.

That is the organization’s message as the Russian invasion of Ukraine enters its third week.

In response to the crisis, Ukraine President Volodymyr Zelensky has called upon citizens and foreign nationals to join in the fight.

He ordered all Ukrainian males between 18 to 60 to enlist in Ukraine’s military. He also created the International Legion of Territorial Defense of Ukraine (ILDTU) as an auxiliary combat force.

“We’re getting thousands of online applications per day on our website,” ILDTU spokeswoman Kristina Zagorulko told The Epoch Times in an email.

The organization also has received applications from Israel, Denmark, Poland, Latvia, and Croatia. However, Zagorulko did not give an exact number of applications received so far.

On the organization’s website, ukrforeignlegion.com, the rules for volunteers are spelled out.

First and foremost, they should have military experience and “know first-hand how to handle weapons.” They should also be confident in military and high-stress situations, and “have a strong will to defend world peace [and] are ready to join right now.”

After Russia “ruthlessly invaded” Ukraine, the website states that Ukrainian soldiers have not surrendered to a superior military force. It adds that the ILDTU was created for foreign citizens who want to “combat the occupiers.”

“Ukraine is fighting for freedom at this very moment. Join the brave,” the website proclaims.

On background, a U.S. State Department spokesperson stated that “Ukrainians have shown their courage and they are calling on every resource and lever they have to defend themselves. We applaud their bravery.”

“However, our Travel Advisory remains. U.S. citizens should not travel to Ukraine, and those in Ukraine should depart immediately if it is safe to do so using commercial or other privately available options for ground transportation,” the spokesperson told The Epoch Times.

“U.S. citizens who travel to Ukraine, especially in order to participate in fighting there, face significant risks to personal safety, including the very real risk of capture or death.”

The spokesperson noted that the United States is not able to provide assistance to evacuate American citizens from Ukraine. This includes Americans who travel to Ukraine to “engage in the ongoing war.”

“In addition to other risks to personal safety, U.S. citizens should be aware that Russia has stated it intends to treat foreign fighters in Ukraine as ‘mercenaries,’ rather than as lawful combatants,” the spokesperson added. “While the United States expects Russia to respect all of its obligations under the law of war, in light of this statement, U.S. citizens who are detained by Russian authorities in Ukraine may be subject to potential attempts at criminal prosecution and are at heightened risk of mistreatment.”

“The American people have demonstrated an incredible outpouring of support for Ukraine in the face of unprovoked Russian aggression.

“It truly reflects the generosity and compassion of the American people.

“We encourage U.S. citizens to continue looking for ways to help Ukraine and its people,” the spokesperson said.

Recent estimates place the number of Ukrainian soldiers killed at nearly 3,000, with 3,700 wounded and 572 captured since the fighting began Feb. 24.