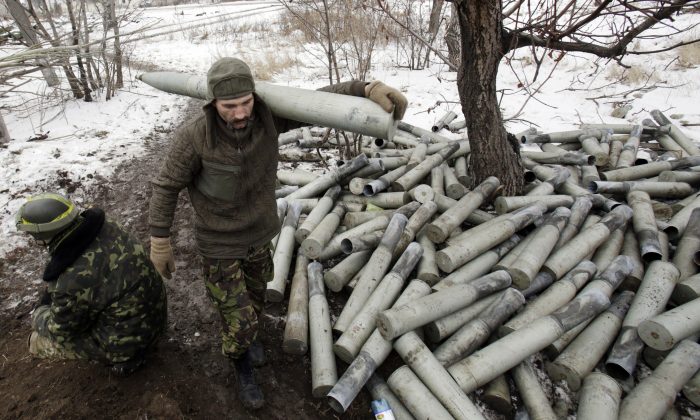 A Ukrainian artilleryman carries a shell past spent shell cases at their position near the eastern Ukrainian village Pisky, Donetsk region, to be fired at the position of pro-Russia separatists at Donetsk airport on Dec. 8, 2014. (Anatolii Stepanov/AFP/Getty Images)
Crisis in Ukraine

DONETSK, Ukraine—Government troops and Russian-backed separatists largely suspended hostilities in east Ukraine on Tuesday, raising hopes of a lasting peaceful settlement in a conflict that has raged for seven months and claimed thousands of lives.

The lull in fighting followed a proposal by Ukrainian President Petro Poroshenko to hold a “day of silence” as a bid to revive a largely ignored cease-fire deal reached in September.

The war has left more than 4,300 people dead, displaced hundreds of thousands and exhausted a nation struggling to stave off economic collapse.

As Ukraine enters its long winter, when temperatures can drop below freezing for days if not weeks on end, combat fatigue is showing on both sides.

Separatist rebel leaders have supported the truce, which appeared to be holding around the main rebel-held cities of Donetsk and Luhansk.

Despite a noticeable decrease in the level of shelling, the military press office said Tuesday evening said there had been 13 attacks on army positions and residential areas in government-controlled settlements.

“Ukrainian troops, behaving with honor and restraint, didn’t open fire in return,” according to a statement.

Earlier, a military spokesman said attacks had been mounted in areas around Debaltseve, a town 70 kilometers (45 miles) east of Donetsk that has been the scene of some of the heaviest shelling as separatists attempt to squeeze out government forces ensconced there.

Rebel authorities said they recorded no rocket attacks by government troops, but that they were engaged with small arms fire.

Viktor Muzhenko, chief of Ukraine’s General Staff, said the truce that began Tuesday was open-ended and that no end date had been set. Military authorities have indicated that the cessation of hostilities is being seen as a confidence-building exercise and that heavy weaponry could be pulled back from the front if fighting stop for several days.

Intense shelling continued right up until the eve of the cutoff period for hostilities, killing four people and wounding 10 others.

At one shattered house in Donetsk, the mother and daughter of a man killed in the shelling were still reeling from the events of the previous day.

Poroshenko’s office earlier this week announced new peace talks involving Russia and the Organization for Security and Cooperation in Europe to be held Tuesday in the Belarusian capital, Minsk.

Vasiliy Vovk, head of the Ukrainian security services’ investigative department, said Monday night that the talks had been pushed back to Friday.

Ukrainian military officials said Tuesday evening, however, that they were uncertain when negotiations would take place.

From The Associated Press. Nataliya Vasilyeva in Moscow contributed to this report.