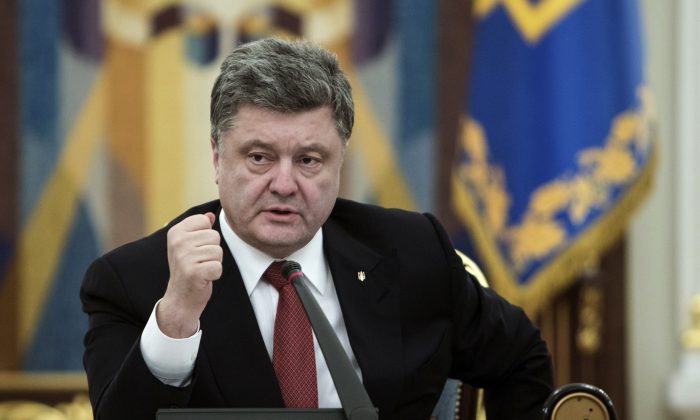 KIEV, Ukraine—Ukraine’s president on Thursday said he expects the separatist-held eastern Ukraine to fall back under government control before the year’s end.

A military conflict between government forces and Russia-backed rebels has killed more than 9,000 people and left parts of the Ukrainian industrial heartland in ruin since fighting broke out there in April 2014.

Speaking at his annual news conference in Kiev, President Petro Poroshenko said he is convinced that the government “should restore its sovereignty” over eastern Ukraine this year, adding that he is going to use all legal means and international talks to do that.

Poroshenko’s comments come a day after negotiators in the Belarusian capital Minsk agreed to make new efforts to enforce the shaky cease-fire. For the talks, Russia sent its new envoy, former parliamentary speaker Boris Gryzlov, who made a rare visit to Kiev earlier this week.

Poroshenko didn’t directly confirm unnamed reports that he had a meeting with Gryzlov, but told reporters on Thursday that he would “meet anyone” if this will stop shelling on Ukrainian positions in the east and help to release Ukrainian prisoners of war.

He also vowed to “fully implement” the Minsk truce deal, saying that “we will not allow any revision of it.”

While hostilities in the east have subsided, a political solution for the war seems to be far off since any concessions to the rebels would be highly unpopular in other parts of Ukraine.

Both Ukrainian government forces and Russia-backed rebels have limited freedom of movement of Organization for Security and Cooperation in Europe monitors in Ukraine. Steinmeier spoke Thursday as the new head of the rotating OSCE chairmanship.