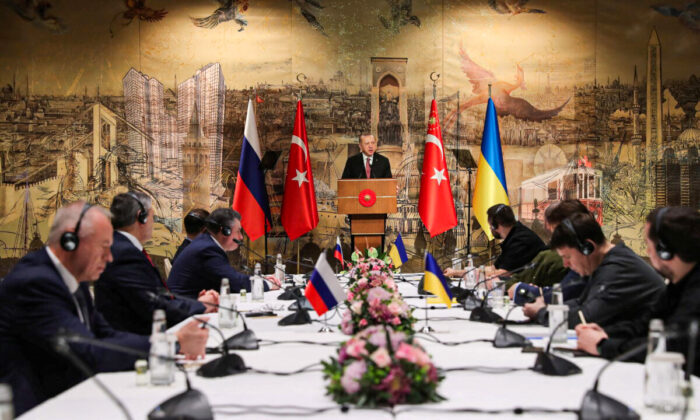 Ukrainian negotiators on Tuesday proposed a mechanism similar to Article 5 of the 1949 North Atlantic Treaty, the founding document of NATO, to guarantee the security of Ukraine.

The proposal would require the guarantors to hold consultations within three days of the start of any war, aggression, military operation, and any disguised, hybrid war against Ukraine.

“After which [the guarantors] are legally obliged to provide military assistance to our country, in particular in the form of armaments and the closure of the skies,” the Ukrainian government said in a statement.

The suggested guarantors include the permanent members of the United Nations Security Council: the United States, Great Britain, France, China, and the Russian Federation.

However, some territories under dispute will not be covered by the security guarantee.

“As for the temporarily occupied territories of the Donetsk and Luhansk regions and the Autonomous Republic of Crimea, since their status is not regulated, international security guarantees will not work temporarily in these territories,” reads the statement.

If a deal is reached on Ukraine’s security, the former Soviet Union country would commit to a non-aligned and non-nuclear state of permanent neutrality, David Arakhamia, head of the Ukrainian delegation, said.

The negotiators did not sign any documents, Arakhamia emphasized.

Arakhamia is also the head of the Servant of the People political party in Ukraine.

The proposal “will be studied in the near future and reported to the president, and then Moscow will come back with a response,” he said.

Medinsky said the talks were “constructive.”

The Kremlin took two de-escalating steps after the negotiations, agreeing to move the potential meeting between Putin and Zelenskyy earlier.

Meanwhile, Russia announced after the negotiations that it is cutting down on its military activity near Kyiv, the Ukrainian capital, and Chernigov.

“The Defense Ministry of the Russian Federation, for purposes of trust-building and creating conditions for holding talks further, and achieving the final goal of agreeing and signing a peace treaty, made a decision to radically decrease the military activities in the directions of Kyiv and Chernihiv [Chernigov],” Alexander Fomin, Russia’s deputy minister of defense, told reporters in Turkey after the two sides met.

Chernigov, in northern Ukraine, sits about 93 miles from Kyiv.

Moscow and Kyiv announced the updates after the two sides concluded the talks in Istanbul on Tuesday.

The talks were planned to last two days over March 29 and March 30 but were brought to close earlier on Tuesday.

The new progress indicates the two sides may be able to reach common ground for a ceasefire after more than a month of war.

The United Nations said that as of March 28, 1,151 civilians have been killed and 1,824 injured in Ukraine since Russia’s invasion and nearly 3.9 million people have fled Ukraine.