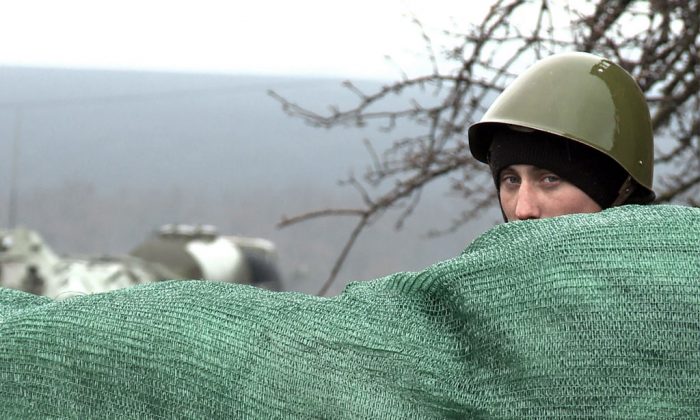 A Ukrainian soldier guards a road not far from Prokhody, a village in the Kharkiv region, some 4 kilometers from the Russian border, on April 5, 2014. Officially, these Ukrainian conscripts are conducting military exercises, but with a reported 40,000 Russian troops gathered along the border just weeks after annexing Crimea, these soldiers have been deployed to repel an invasion from invisible but feared troops amassed on the other side. (Robert Leslie/AFP/Getty Images)
Opinion

Ukraine Crisis: Is the West Powerless to Stop Russian Aggression?

As the situation in Ukraine rapidly spins out of control, various Western leaders have stepped up their verbal warnings to Russia.

President Obama, in a telephone call with President Putin on Monday night, urged his Russian counterpart to stop meddling in Ukraine and threatened further sanctions.

The secretary-general of NATO, Anders Fogh Rasmussen, called on Russia to “stop being part of the problem, and start being part of the solution”, including by pulling back its troops from Ukraine’s borders. At the same time, the NATO secretary-general emphasized NATO’s commitment to further strengthening collective defense at sea, in the air and on land in terms of “re-enforced defense plans, enhanced exercises and appropriate deployments.”

The EU’s foreign affairs chief, Baroness Catherine Ashton, issued a similar statement of concern following a meeting of its member states’ foreign ministers on Monday, echoing NATO’s calls for Russia to pull back its troops and to stop further destabilization of Ukraine. Similar to the United States, the EU not only reiterated its political and economic support for Ukraine but also committed to further tightening its sanctions against Russia.

The U.K.’s foreign secretary, William Hague, announced that, while new EU sanctions against Russia would not kick in automatically, the U.K. was prepared to limit trade with Russian firms, which is particularly beneficial to the City of London. His German counterpart, Frank-Walter Steinmeier, from the traditionally more Russia-friendly Social Democratic Party, took a similar line when he noted that while he “could understand the business community’s desire not to impose economic sanctions on Russia, … the German government was determined to take that path if Russia continued to stir up trouble in eastern Ukraine.”

One reading of these and various similar statements and actions is, at worst, one of Western impotence and, at best, one of a self-interested focus on Western security. Impotence in the inability to stop Russian efforts to destabilise Ukraine, or alternatively to come up with a stronger set of policies to deter Russia from continuing to do so. And self-interest in the sense that whatever measures have been taken so far seek to limit costs to the West, even at the risk of effectiveness of the half-hearted policies adopted, and focused on protecting current EU and NATO members rather than standing up for Ukraine.

In this reading of the situation, Western actions are an open invitation to Russia to continue down its current path of creating a new zone of influence under its permanent control at the expense of the people in the countries affected, a new Soviet Union in all but name and full geographical extent. In other words, the West becomes an enabler of Russian revisionism and expansionism.

A somewhat more benign reading would be to accept the obvious shortcomings of the Western response, but to see them as a result of a miscalculation of Russian strategy. The slow and only gradually more assertive responses from the United States, as well as from NATO and the EU and their member states would then reflect a coming-to-terms with a new reality in which Russia can no longer be considered a partner and Europe’s security can no longer be taken for granted. This is very much the message in a recent video from the NATO secretary-general.

Turning a necessity into a virtue, however, it could also be argued that the incremental toughening-up of the West’s responses keeps the door open for diplomatic solutions and has not fallen into the trap of a tit-for-tat escalation, which is difficult to step back from and makes face-saving exits for both Russia and the West ever more difficult while being played out on the back of the people of Ukraine. The talk of new sanctions gives at least a limited hope to the four-party talks in Geneva scheduled for Thursday, and were apparently the focus of a phone call between German Chancellor Angela Merkel and Putin on Tuesday night. The mere consideration of additional sanctions does not compel Russia to a response, and in fact may offer Moscow an incentive to participate. In turn, it leaves the United States and EU with options, depending on the outcome of the talks, which could be as little as an agreement to meet again in the same format.

Insisting on the possibility of a diplomatic way forward, as the West and Russia both continue to do, may not be much at this stage, but it is better than the alternative of walking straight into a military confrontation between Russia and Ukraine. Nor does it mean that the West does not have an important lesson to learn here. Rather than simply buying into our own rhetoric of a norms- and values-based international society, we must be prepared to back up such rhetoric with credible policies to protect these norms and values and abide by them ourselves.

Stefan Wolff is a professor of international security at the University of Birmingham in the U.K. This article was previously published on TheConversation.com