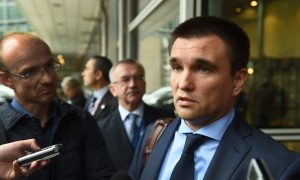 Eugene Chausovsky: Hello. My name is Eugene Chausovsky. I’m a Eurasia analyst here at Stratfor, and joining me today is Lili Bayer, a fellow Eurasia analyst. Today we will be discussing the latest in the standoff between Russia and the West over Ukraine. So Lili, there’s been a lot of diplomatic activity recently surrounding the Ukrainian crisis. We had a phone call happen between Putin and the German and French presidents. Shortly after that, they announced that they would be holding the newest round of Minsk talks this Wednesday and Friday, but we’ve also seen today that Ukraine passed a law basically scrapping its non-bloc status, which theoretically, at least, opens the opportunity for the country to join NATO. How do you see that impacting the talks that will be held this week?

Lili Bayer: Since 2010, Ukraine has legally not been allowed to join any kind of military organization. With the passage of this law, technically, Ukraine could apply for NATO membership, but the thing is the Ukrainian leadership has been discussing this law since the summer. Although the Kremlin is definitely not happy with the decision, both the Russian and Ukrainian leaderships are aware that NATO membership is not really on the table for Ukraine, at least in the short run.

Eugene: Right. We’ve even seen Poroshenko, the president of Ukraine, says that membership in NATO is not something that’s going to happen any time soon. It’s going to be five years before Ukraine even applies to join NATO and the EU as well, so that doesn’t seem to be in the cards immediately. It’s interesting because what we’ve seen on the ground in Ukraine and eastern Ukraine seems to be going counter to this kind of notion of an intensification. How has that played out in the recent months?

Lili: The original cease-fire was decided on Sept. 5, but since then, we have seen fighting in several hotspots including the Donetsk airport. Since early December, we have seen a significant de-escalation. There is still some shelling and small arms being used, and we did see some infrastructure being targeted near Mariupol earlier today, but there still is an understanding on both sides that they want to see less fighting, especially now when the weather is getting colder.

Eugene: Right. I think one major factor in this decrease in fighting, or at least the decrease in escalation, is the Russian economy. Obviously, there’s been a lot of negative news in recent weeks. We’ve had the major devaluation of the ruble, and Russia is really struggling right now economically. Sanctions have hurt Russia, but really it’s the price of oil, the decline of oil prices, that’s really hurt Russia a lot. Conversely, that could be one of the major reasons why Russia is becoming less aggressive in Ukraine. We saw when the crisis broke out Russia making a lot of aggressive moves in Crimea and then supporting the separatists, but the past couple of months have died down. I don’t think that’s a coincidence when you match it up with Russia’s economic situation.

Lili: Right. So at this moment, the Russian government really wants to have the ability to focus on domestic policy. Today we had the Russian prime minister talking about how, even though and economic crisis is ongoing, Russia shouldn’t cut social spending, which is an important part of keeping the Kremlin popular within Russia. As Russia faces the decreasing oil prices and the sanctions, the Kremlin is looking for ways to ease the economic pressure. One of those ways would be de-escalation in eastern Ukraine and trying to get some members of the European Union such as Germany, which itself has been suffering because of the economic downturn in Russia, to agree to at least some easing of the sanctions.

Eugene: So we see, basically, Russia under tremendous constraints because of the economic situation, and that in turn is affecting its power projection and its military posturing in Ukraine. But as you mentioned, Germany and several other European countries are also quite worried. The sanctions were effective in terms of shaping Russian behavior, but now, combined with the low oil prices and the cyclical downturn that had started last year, it’s having a really major impact on the Russian economy. You have countries in Central and Eastern Europe, but you also have countries like Germany, like Italy, that do a lot of trade with Russia and are worried about the economy getting so bad that it has a contagion effect on the Europeans and basically an impact on their already tenuous economic situations as well. This is kind of framing these talks that are happening this week and that are ongoing. It seems to point to a larger scale de-escalation of the crisis.

Lili: We will see some items still not being resolved in this week’s talks. They will be discussing issues like prisoner exchanges, withdrawing heavy arms from the contact line and, in general, the future status of Donbas. So with some of these issues like withdrawing heavy arms, we can see some progress, but others such as the future status of Donbas, will largely remain unresolved despite this short-term de-escalation.

Eugene: Right. I think de-escalation shouldn’t be confused with a broader settlement of the conflict. I mean, there are still a lot of factors in play. Russia continues to support the separatists. There continues to be some military action throughout Russia’s former Soviet periphery that Russia doesn’t seem to be wanting to scale back, at least not at this moment. I think it will be a long and drawn out affair, but the tide seems to be turning against a major Russian military action in Ukraine, which in turn could soften the sanctions potentially and lay the groundwork at least for some kind of understanding over Ukraine between Russia and the West. Anyway, that’s all we have time for now. Lili, thank you very much for joining me, and thank you for watching.

“Conversation: Ukraine Conflict Points to De-escalation” is republished with permission of Stratfor.