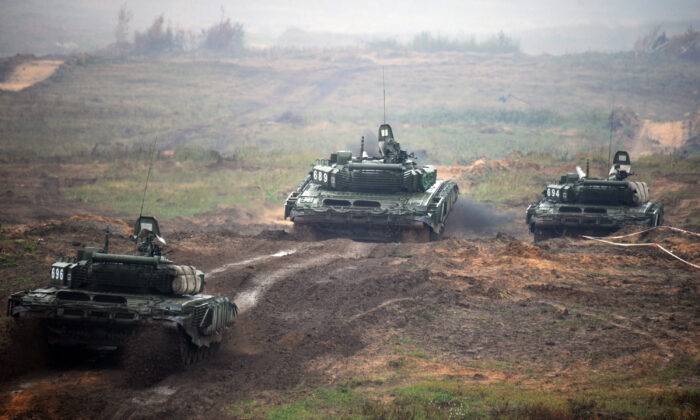 Tanks take part in the joint Russian-Belarusian military exercises Zapad-2017 (West-2017) at a training ground near the town of Borisov on Sept. 20, 2017. (Sergei Gapon/AFP via Getty Images)
Russia-Ukraine War

Ukraine Claims That Russia Is Out of Money for Tanks

The General Staff of Ukraine’s Armed Forces claimed on Tuesday that their adversary at war, the Russian Federation, has been rendered unable to build or repair tanks, as sanctions from the West have incapacitated the nation’s economy and its ability to maintain its war machine.

In a Facebook post, with Ukrainian text accompanied by an imperfect English translation, representatives of the Ukrainian military claimed that leading Russian arms manufacturers had been forced to suspend operations as a result of a scarcity of foreign-made parts, as global sanctions have allegedly jeopardized their ability to continue operations to supply the Russian military.

In the fog of war, it is difficult to discern what information to trust about ongoing military developments in the invasion. However, one may speculate based on the circumstances of the Russian weapons industry and the countries that have sanctioned the suppliers of Russia’s armed forces.

Unlike the United States and NATO, which outsource much of their arms manufacturing to private companies, Russia depends on the state-owned Uralzavod as its sole tank manufacturer, according to the European Union. On March 15, the EU sanctioned Uralzavod along with a host of other Russian companies, following in the footsteps of the United Kingdom, Japan, and others who sanctioned the Russian tank manufacturer at the outbreak of the war. (The United States has held sanctions on the company since 2014, following Russia’s annexation of Crimea.)

“According to the available information, due to the lack of receipts of foreign-made components, the work of the enterprises of the Uralzavod Corporation and the Chelyabinsk Tractor Plant has been suspended,” reads the Facebook post. “These companies specialize in the manufacture and repair of tanks and other armored vehicles for the armed forces of the russian [sic] federation.”

Putin has publicly denied that Western sanctions have seriously harmed the Russian war effort, saying on March 17 that “this economic blitzkrieg against Russia has failed.”

According to the open-source project Oryx, Russia has lost 270 tanks during the invasion. The same reports describe only 73 tanks lost on the Ukrainian side, suggesting that armored vehicles have been a stumbling block for the larger and more powerful military of Russia.

If the Ukrainian military’s Facebook post is correct, it could have significant implications for the war, further hampering Russia’s ability to advance into the Ukrainian interior. After a fast and seemingly effective opening, Russia’s invasion has seemingly stalled in recent weeks, and the territorial map has changed relatively little in recent weeks. If Russia is unable to supply or repair a sufficient force of tanks, the Ukrainian government may find themselves in a surprisingly favorable position against the invaders, as they may find their adversary suddenly bereft of an adequate supply of tanks to continue the invasion.