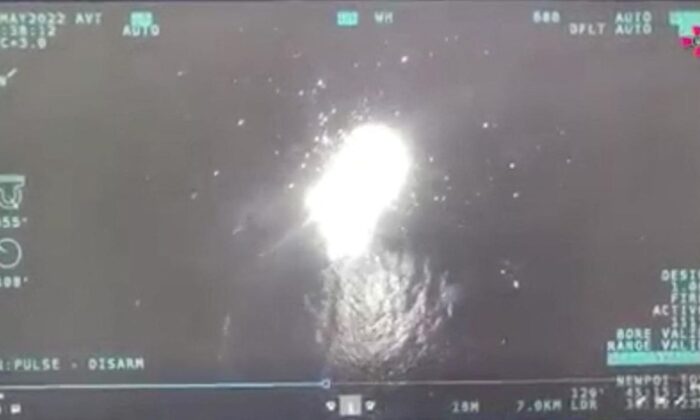 A vessel claimed to be a Russian Raptor boat is destroyed with use of a Ukrainian-operated drone in the Black Sea on May 2, 2022. (Ukrainian Armed Forces)
Russia-Ukraine War

In social media posts, the Ukrainian Ministry of Defense said the Russian ships were Raptor-class assault boats and were struck near Snake Island, an island that was captured by Russian forces early on in the war and is located about 70 nautical miles from Odesa in the Black Sea. The agency released footage, dated May 2, that purported to show the strikes.

The footage suggested that both boats appeared to have been struck by explosions, but it’s not clear whether they sank. The Epoch Times could not immediately verify the claims, and Russian officials have not issued public comments on Ukraine’s latest claims. Also unclear is whether there were any casualties.

The Raptor boats are capable of carrying 20 people each and can patrol coastal waters, engage with air targets, and intercept small vessels.

Two weeks ago, the Russian naval ship Moskva, a guided-missile cruiser, sunk in the Black Sea. Ukrainian officials claimed that their forces sunk the ship, while Moscow said that a fire on board caused an ammunition explosion. The Kyiv government also said it sunk a Russian landing ship several weeks before that, posting video footage of a fire and explosion at the Russian-occupied Berdyansk port in the Sea of Azov.

On Monday, video footage released by both Ukraine and Russia showed civilians being evacuated from a bombed-out steel plant in Zaporizhzhia near Mariupol, according to The Associated Press.

Mariupol Deputy Mayor Sergei Orlov told the BBC that the evacuees were making slow progress and would probably not arrive on Monday as hoped for. Authorities gave no explanation for the delay.

At least some of the evacuees were apparently taken to a village controlled by Russia-backed separatists. The Russian military said that some chose to stay in separatist areas, while dozens left for Ukrainian-held territory.

Ukrainian President Volodymyr Zelenskyy said he hoped more people would be able to leave Mariupol in an organized evacuation on Monday. The city council told residents wanting to leave to gather at a shopping mall to wait for buses.