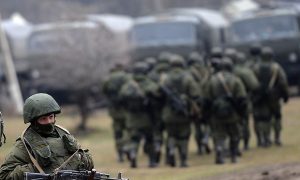 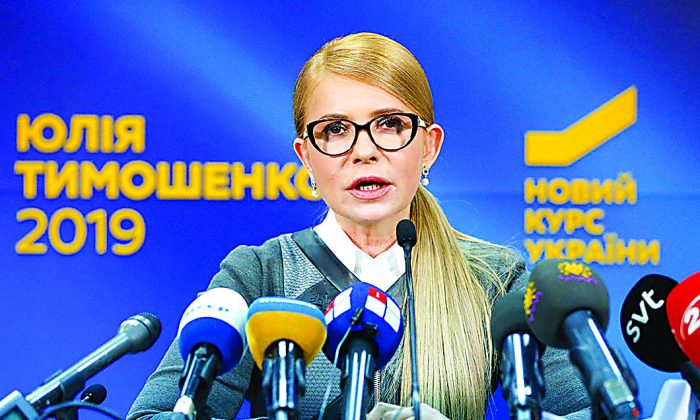 “Those who earned even one black kopeck by exploiting the army and the war will sit in prison for life,” Tymoshenko said at a news conference where she alleged Poroshenko “simply laundered defense money.”

The candidate, a former prime minister and a main figure of the 2004 Orange Revolution, has support nearly equal to Poroshenko’s ahead of the March 31 election, according to polls. But both are behind another challenger, comedian Volodymyr Zelenskiy.

Tymoshenko also alleged that the presidential administration was behind the candidacy of a rival with a similar name, Yuri Tymoshenko, to confuse voters.

Prosecutor-general Yuri Lutsenko has alleged that a member of Tymoshenko’s party was behind an attempt to bribe the similarly named candidate to drop out of the race. Two people were arrested in the case March 6.

At the news conference, the former prime minister distanced herself from the mater.

“It all is like the American movie comedy ‘Dumb and Dumber,’ with Poroshenko and Lutsenko taking part,” she said.

Tymoshenko also signed what she said was a commitment to end the fighting against Russia-backed separatists in eastern Ukraine and to restore Russia-annexed Crimea to Ukraine.

“We don’t take on the obligation to end the war in two weeks because we are responsible politicians, but there is no doubt we will absolutely establish peace on all of Ukraine’s territory, and Donbass and Crimea will be returned,” she said.

She also said she was prepared to commit to actions such as lowering household costs for gas and water, raising pensions and supporting families with multiple children.

Zelenskiy on March 7 met with U.S. Undersecretary of State for Political Affairs David Hale and complained that his campaign was under pressure from Ukrainian authorities.

Zelenskiy claimed that criminal cases have been opened against him and his video and film production company, although there is no official confirmation of such cases.

He also complained about listening devices that were found this week in the building where he has offices.

The Interior Ministry published photos of some of the devices and a member of the ministry’s administrative council said such devices are available only under license from the national security service, the SBU.

The SBU on March 7 denied it was listening in on Zelenskiy and said the devices were placed there as part of a counterintelligence investigation. It said the service had begun criminal proceedings against the ministry for harming national interests by revealing SBU workings.