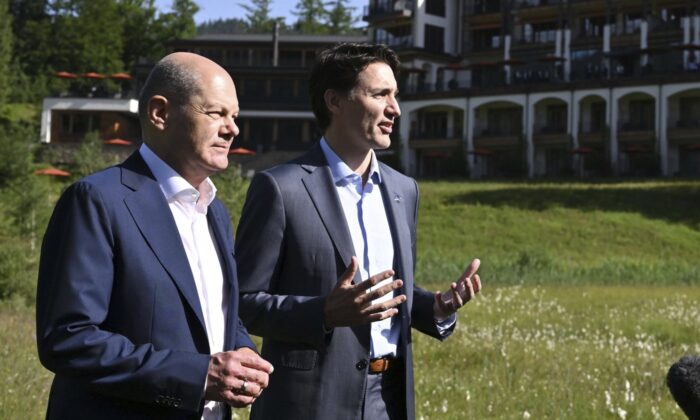 German chancellor Olaf Scholz, left, and the Prime Minister of Canada, Justin Trudeau, right, give a statement during their bilateral meeting on the sidelines of the G7 summit at Castle Elmau in Kruen, near Garmisch-Partenkirchen, Germany, on June 27, 2022. (The Canadian Press/Kerstin Joensson/Pool Photo via AP)
Canada

Prime Minister Justin Trudeau is facing renewed calls from Ukraine to cancel a permit allowing turbines repaired in Montreal to be sent back to a Russian energy giant as a three-day visit from Germany’s leader gets underway.

Chancellor Olaf Scholz, who took over from Angela Merkel in December last year, touched down in Montreal on Sunday evening for a visit that also includes scheduled stops in Toronto and Stephenville, N.L.

He will be accompanied throughout the tour by vice-chancellor Robert Habeck, who is in charge of the country’s energy file.

Deputy Prime Minister Chrystia Freeland greeted the visiting dignitaries on the tarmac of Montréal-Trudeau International airport upon their arrival on Sunday evening. She gave the German leader a hug against a backdrop of German, Canadian and Quebec flags.

A statement from the Prime Minister’s Office said the visit will advance shared priorities between Canada and Germany, “including our unwavering support for Ukraine, protecting peace and security in Europe and around the world, and addressing the broader global impacts of Russia’s illegal and unjustifiable invasion.”

Ukraine has criticized Trudeau and his government for a decision last month to agree to a request from Germany to exempt Siemens Canada from sanctions against Russia so it could return a turbine for use in the Nord Stream 1 pipeline that supplies natural gas to Germany.

The turbine had been under repairs at Siemens’ Montreal facility, the only location in the world capable of maintaining the equipment. It was delivered to Germany and was supposed to go to Russia from there, but Russian authorities have so far refused to accept it.

Russia has also cut gas flows in the pipeline to 20 percent of capacity and recently announced it would shut down the line entirely for three days at the end of the month, citing the need for unscheduled maintenance.

Canada’s permit also allows Siemens to import, repair and return five other turbines used in Nord Stream 1, according to their maintenance schedule, and is valid until the end of 2024.

In an interview, the Ukrainian ambassador to Canada, Yulia Kovaliv, called again for the waiver to be cancelled.

She said it is clear that Russia will not accept the turbine that Siemens has delivered to Germany, and accused Russia of using gas supplies as a way of terrorizing Europe.

“Our position is quite clear: we do think that this waiver should be cancelled and now,” she said.

“If it was an argument to call Putin’s bluff, everybody sees for the last few weeks it is now quite obvious that it is Russian games.”

Orest Zakydalsky of the Ukrainian Canadian Congress said the chancellor’s visit will “be a chance for them to reverse the policy and cancel the permit.”

Ministers have defended the move as necessary to secure gas supplies for Germany, as well as to call Putin’s bluff. They argue the Kremlin would have used Canada’s refusal to return the turbine to blame sanctions for energy shortages in Europe, which could undermine public support for Ukraine.

Natural Resources Minister Jonathan Wilkinson said in an interview that Canada will continue to “assess” its decision to allow the turbine to be returned to Gazprom, the Russian state-owned energy giant that operates Nord Stream 1.

“It was obviously a difficult decision and it was one that we made on the basis that we believe that not sending the turbine back would have given Putin an excuse,” he said.

“It would have potentially had the effect of undermining the support that Ukraine enjoys on the part of some of the European populations.”

Wilkinson said he now felt Russia’s position has been exposed and there is increasing pressure on Gazprom and on the Russian government.

“Our expectation and our hope is that the turbine will actually go back to Gazprom, and it will eventually come into service.”

He added that the government stands by its decision and feels it is far too early to be thinking about changing its exemption, but said “we will have to see what evolves over the next few months.”

“We obviously will continue to have a dialogue with our European partners and our German partners,” he said.

Scholz and Trudeau plan to discuss energy security and the transition to clean energy, “including through secure access to key resources like clean hydrogen and critical minerals,” according to the Prime Minister’s Office.

In Stephenville, the leaders are expected to sign a pact that will set aggressive timelines and targets for exporting hydrogen to Germany, though some experts warn the deal will serve only as a small, far-off and expensive part of the solution to Europe’s energy crisis.

A consortium of four partners calling itself World Energy GH2 plans to build a zero-emission plant in the Newfoundland community that will use wind energy to produce hydrogen and ammonia for export.

If approved, the project would be the first of its kind in Canada.

The consortium has said the first phase of the proposal calls for building up to 164 onshore wind turbines to power a hydrogen production facility at a deepsea port. Long-term plans call for tripling the size of the project.

By Marie Woolf and Mia Rabson