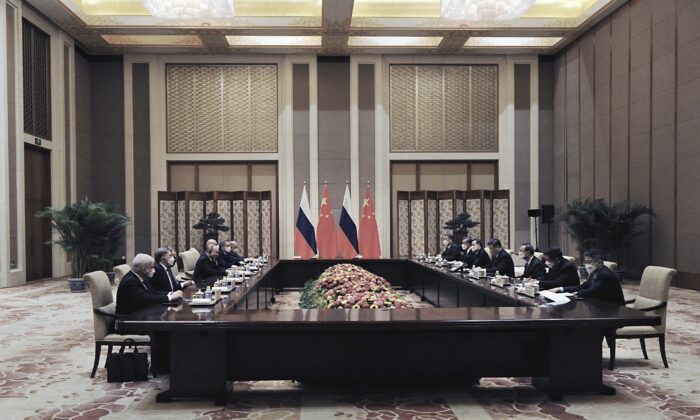 Ukraine Betrayed by the CCP

In the Russian invasion of Ukraine, the Chinese Communist Party (CCP) played the role of a shameful accomplice. The crisis provides a textbook example of why the world should not take the CCP’s promises too seriously.

Since Ukraine gained its independence in 1991, the two countries signed a total of five joint declarations in 1992, 1994, 2002, 2010, and 2013, according to the Chinese embassy in Kyiv. China repeatedly pledged to support Ukraine’s independence, sovereignty, and territorial integrity.

In particular, the 2013 joint declaration, under CCP leader Xi Jinping’s watch, obligates China to provide security and protection in the event that Ukraine is under attack.

The document reads: “In accordance with the UN Security Council Resolution 984 and the statement of the Chinese government on 4 December 1994 on providing security assurances to Ukraine, China undertakes unconditionally not to use or threaten to use nuclear weapons against Ukraine as a non-nuclear-weapon state, and to provide corresponding security assurances to Ukraine in the event that Ukraine is subject to aggression by or under the threat of such aggression.”

Now that Ukraine is attacked by Russia, and the aggressor threatened implicitly to use nuclear weapons, where is the Chinese assurance? Moreover, the CCP refused to call the Russian attack an invasion and blocked efforts by the United Nations to censure Moscow’s aggression.

This is not the first time that the CCP abrogated its treaty obligations to Ukraine. When Russia annexed Crimea in 2014, the CCP abstained in a U.N. Security Council vote on a draft resolution, which declared that the referendum to legalize the annexation was invalid. In his Crimea speech that year, Russian President Vladimir Putin openly expressed gratitude to China for this position.

Now Ukraine is betrayed twice. According to The New York Times, as early as last December, the United States informed China of Russia’s planned attack on Ukraine, and asked Beijing to intervene to stave off the crisis.

The CCP considered Washington’s move as a wedge to divide China and Russia. Instead of preventing the Ukraine crisis from escalating, Beijing stressed solidarity with Moscow.

On Dec. 30, Chinese Foreign Minister Wang Yi said that “as long as China and Russia stand shoulder to shoulder and deepen cooperation back-to-back, the international order will not be chaotic, world justice will not fall, and hegemonism will not win.”

Thus, the CCP disclosed the U.S. information to Russia, but not to Ukraine. It also refused to stop Russia’s aggressive moves. The only request it made to Moscow was to wait until the Beijing Winter Olympic Games ended.

On Feb. 4, about three weeks before the invasion, Putin and Xi signed a joint declaration, pledging that “Friendship between the two States has no limits, there are no ‘forbidden’ areas of cooperation.” Furthermore, it states that “the new inter-State relations between Russia and China are superior to political and military alliances of the Cold War era.”

The wordings suggest that it is likely to be a quasi-military pact. Many observers believe that this pact, along with 15 associated economic agreements, provided tacit support to the Russian invasion.

On Feb. 22, Russia announced its recognition of the independence of Donetsk and Luhansk, two pro-Russia break-away provinces in Eastern Ukraine, and sent troops to “maintain peace” there.

On Feb. 24, Putin launched a full invasion in Ukraine. Then on the following day, Putin and Xi had a phone call. According to the Russian press statement, Xi expressed “respect and understanding” of the Russian move (the version published by the Chinese side omitted this point).

Clearly the CCP stood with Russia “shoulder to shoulder” and “back-to-back” in the invasion of Ukraine, abrogating all its treaty obligations to the latter.

The betrayed Ukraine had been supporting the CCP in various ways ever since its independence.

Militarily, Ukraine sold the half-finished aircraft carrier Varyag to China in 1998, thus enabling the latter to build its first aircraft carrier Liaoning, a major stride in the CCP’s aspiration to build a blue water navy. Since then, Ukraine has been a regular exporter of Soviet Union-era military technologies to China.

Politically, Ukraine had stressed its adherence to the “one-China policy” and considered Taiwan as a part of China. It also voted against a U.N. Human Rights Committee resolution condemning the CCP’s ethnic suppression of Uyghurs in Xinjiang.

Economically, Ukraine was the first European nation to sign a deal over infrastructure projects under China’s Belt and Road Initiative (BRI, also known as “One Belt, One Road”). A letter of intent was signed in 2014 and actual implementation started in 2017. Chinese capital was used to build two major ports in the Black Sea.

Ukraine allowed the Xinjiang Production and Construction Corps to rent 100,000 acres of land for 50 years to build China’s “overseas farms.” This project will eventually expand to 3 million acres. Ukrainian President Volodymyr Zelensky proudly declared in July 2021 that his country served as China’s bridgehead for economic expansion into Europe.

To Ukraine’s surprise, Russia launched an invasion with the subtle support of the CCP. Despite the diplomatic relations, trade, and security agreements between Ukraine and China, the CCP’s promises have become empty words now. All countries should take heed of this.