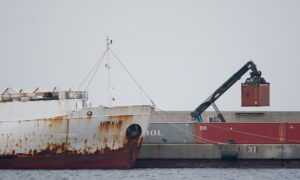 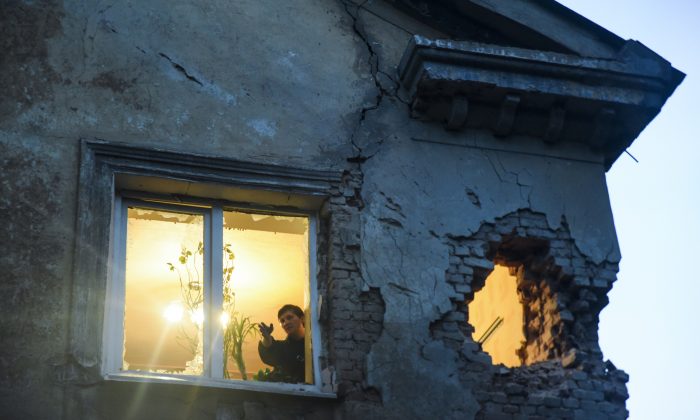 KYIV, Ukraine—A major battle erupted Wednesday on the western edge of the main separatist rebel stronghold in eastern Ukraine, leaving more than a dozen dead and threatening to tip the country back into full-blown war.

Rebels in the city of Donetsk reported 15 dead between civilians and combatants in territory under their control.

Each side is blaming the other for sparking this round of unrest.

The Ukrainian Interior Ministry said at least one person was killed in Marinka, the government-held town where fighting was centered. Ukrainian presidential adviser Yury Biryukov cited the general staff as saying three Ukrainian soldiers died in combat and that another 30 were wounded.

Each side is blaming the other for sparking this round of unrest.

Ukraine’s general staff said in a statement that rebels deployed around 1,000 fighters and dozens of tanks and self-propelled artillery systems in a major offensive that started before dawn.

The statement said the attack was a flagrant violation of a February cease-fire agreement.

The head of the separatist armed forces, Vladimir Kononov, said his fighters had engaged only in defense measures after an all-out assault by the Ukrainian army.

“At around 03:45 a.m., the Ukrainian side carried out a provocation by shelling our positions practically along our entire front,” Kononov said.

Kononov listed several positions far apart from one another along the 450-kilometer (280-mile) front.

Yatsenyuk urged the leaders meeting at the G-7 summit in Germany this weekend to condemn Russia.

“The international community must come up with a correct and appropriate response to Russian aggression,” Yatsenyuk said.

Ukrainian Security Services spokesman Markian Lubkivskyi said his agency had information four fighters with Russian military intelligence agency GRU were killed in Marinka. Lubkivskyi did not explain how that information was acquired.

Negotiators from the warring sides met for new talks in Belarus on Tuesday, but the session concluded without obvious progress.

Implementation of the cease-fire sealed in Belarus in February has foundered amid a proliferation of low-intensity battles that have now been overshadowed by developments in Marinka.

Negotiators from the warring sides met for new talks in Belarus on Tuesday, but the session concluded without obvious progress. Another meeting is planned for the weekend.

Russia has said it is unnerved by the violence, which it is blaming on Ukraine.

“We here in Moscow are closely watching it and feel extreme concern about the provocative actions by the Ukrainian armed forces,” said Kremlin spokesman Dmitry Peskov.

The U.S. State Department said it was disturbed by the unrest and said any rebel attempts to seize Ukrainian territory would have costs for Russia, which it accuses of guiding the separatists.

Regular reports of casualties among government and separatist fighters have continued unabated since February, but deaths among noncombatants had almost ceased. That trend has been disrupted in recent days in an indication that the warring sides are again increasingly resorting to indiscriminate shelling.

The head of the government-controlled part of the Luhansk region, Hennadiy Moskal, said in a statement on his official website that an elderly couple died when their car was struck by a mortar Wednesday morning, 20 kilometers inside government-held territory.

Russia’s Interfax news agency cited a rebel representative as saying that one resident in the town of Yenakieve was killed near a waste treatment plant during a 20-minute barrage. Ukraine’s military denies it attacked Yenakieve.

An array of social media postings showed the aftermath of shelling Wednesday in locations deep within the rebel citadel of Donetsk.

The armistice signed in February requires both sides to pull back heavy weapons from the front line, but international observers vetting that process regularly note violations across the board.

The Organization for Security and Cooperation in Europe (OSCE) said in its most recent status report that its monitors on Tuesday heard 126 explosions from their observation point inside Donetsk. The report did not specify if the blasts indicated incoming or outgoing fire.

The OSCE team also reported visiting the site of three artillery impacts in the city. One crater seen in rebel-held territory by the OSCE appeared to have been the result of a 122 mm shell. Weapons capable of firing ammunition that size were to be withdrawn from the front line under the terms of the cease-fire.