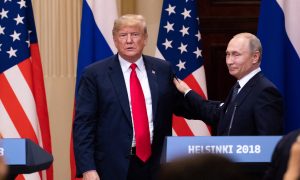 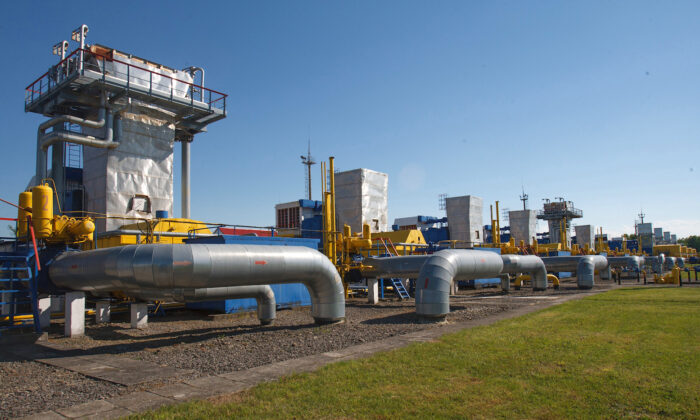 A view of pipelines at the Bilche-Volytsko-Uherske underground gas storage facility, the largest in Europe, not far from the village of Bilche village, in the Lviv region of western Ukraine, on May 21, 2014. (ALEXANDER ZOBIN/AFP via Getty Images)
Europe

Ukrainian and Russian gas companies have hammered out a complex series of agreements that will see Russian natural gas supplies continue to be delivered to Europe via Ukrainian pipelines. The eleventh-hour deals mean that the Ukraine will receive around $7 billion in transit payments over the next 5 years.

According to the agreement, 65 billion cubic meters (bcm) of Russian gas will transit through Ukraine in 2020, while some 40 bcm is guaranteed each year from 2021 to 2025. The agreement also foresees the possibility of a 10-year contract extension. Furthermore, Ukraine’s Naftogaz received $2.918 billion in payments and late payment fees from Russia’s Gazprom, which was awarded by a court in Stockholm in 2018. According to Naftogaz CEO Andriy Kobolyev, total transfers to Naftogaz including all settlements will amount to some $5 billion.

* Agreement includes minimum transit of 65 Bcm in 2020
* Shipments to be at least 40 Bcm from 2021
* $7 billion contract may be extended for further 10 years@boudicca83 story: https://t.co/tLD2EN0Jhn pic.twitter.com/OntIlDqeQs

As the agreements were signed after arbitration talks in Vienna, Austria, late on Monday, Ukraine’s President Volodymyr Zelensky said that the contracts would ensure Ukrainian “energy security and well-being,” while letting “Europe know that we won’t fail it when it comes to energy security.”

A press release from Russian President Vladimir Putin described how the two leaders had worked together by phone to arrive at a solution: “The two presidents underscored the importance of yesterday’s package deal whereby uninterrupted transits of Russia’s natural gas to Europe through Ukrainian territory will continue after Jan. 1, 2020. They noted the constructive nature of talks on these matters, which creates a favorable backdrop for resolving other bilateral problems.”

A statement from Zelensky reiterated that the negotiations could be a stepping stone to resolving other contentious issues between the countries. “During the conversation, the heads of state also agreed to immediately proceed to the approval of the lists for the release of Ukrainians, including Crimeans, held in Crimea and Russia, and Russians held in Ukraine.”

Package of documents signed for Russian gas transit across Ukraine to continue beyond 2019https://t.co/TNeHnO2XSY pic.twitter.com/N7Nf49avxd

The deal came just one day before existing transit contracts were due to expire on Dec. 31—a scenario that could have led to Ukraine cutting off a substantial portion of Russian gas deliveries to Europe, or to Russia cutting off gas supplies to Ukraine, a country heavily dependent on Russian gas for home heating and industrial processes.

Russia currently delivers gas to Europe via major pipelines that run through Ukraine and Belarus (the Yamal and Brotherhood pipelines) and directly to Germany under the Baltic Sea (the Nord Stream 1 pipeline).

About 40 percent of Russian gas piped to Europe currently passes through Ukraine, and is an essential source of income (in the form of transit charges) and affordable energy for a developing country beleaguered by grinding poverty, unrest, and the 2014 annexation of the Crimean Peninsula by Russia.

Naftogaz Learning From the History Books

Gazprom CEO Alexey Miller said he believed the agreements “restored the balance of interests between the parties,” and that “Gazprom has shown again that it’s a responsible supplier and a reliable partner.”

In an interview with the Kyiv Post, however, Naftogaz CEO Andriy Kobolyev said that, “In order to reach the deal, it was very important to take into account the lessons of 2009.”

Kobolyev said that Naftogaz had been preparing for the negotiations for some time, including ensuring that Ukraine’s gas storage systems were filled to the tune of “21 bcm—even more.”

He added that if no agreement had been reached, “Ukraine will survive. We would not be begging for gas as was in 2009.”

During a dispute over gas supplies and transit fees between the Ukraine and Russia 11 years ago, gas supplies to the Ukraine were cut off for most of January. Against this backdrop, Kobolyev said that he welcomed U.S. sanctions on the Nord Stream 2 pipeline as well as signals that Germany would not make Nord Stream 2 operational until the Ukraine-Russia agreement had been reached.

He went further, saying, “If you ask me what is the best way for Ukraine to secure a long and proper deal with Gazprom, it’s the absence of Nord Stream 2.”

He also cast doubt on whether the pipeline could be completed if American sanctions remained in place—which he agreed would be “very good news for Ukraine.”

Kobolyev said that he tries to explain to his U.S. and European counterparts just how critical gas is in terms of Ukrainian national security. “Gas is one of the best protectors for Ukraine as a country. As long as critically big gas flows, gas volumes are flowing through Ukraine, the likelihood of full-scale military invasion [by Russia] remains quite low.”

Mere weeks away from the completion of Nord Stream 2, Allseas, a Swiss-Dutch specialist in offshore pipe-laying, suspended their work on the project due to the sanctions. Nord Stream 1 (completed in 2011) and Nord Stream 2 each have a capacity of 55 bcm, giving a potential total of 110 bcm of gas that could be transported directly from Russia to Germany—without passing through a transit country.

Allseas was laying the pipeline using two vessels—Pioneering Spirit and Solitaire—and was expected to lay 96 percent of all the pipes needed for Nord Stream 2.

According to a statement from Allseas: “In anticipation of the enactment of the National Defense Authorization Act (NDAA), Allseas has suspended its Nord Stream 2 pipelay activities. Allseas will proceed, consistent with the legislation’s wind down provision and expect guidance comprising of the necessary regulatory, technical and environmental clarifications from the relevant U.S. authority.”

Unfortunately for Ukraine, such alternative gas pipeline projects are decreasing Russian reliance on Ukraine’s pipelines, and weakening its position in future price negotiations. Russia’s Turkstream project has seen a gas pipeline laid under the Black Sea from Russia’s Krasnodar region to Turkey and on to Europe, and is set for completion in early 2020. Turkstream will carry approximately 31.5 bcm of gas.

Nord Stream 2, the second alternative, is believed by the Trump administration to make Europe overly reliant on Russian gas, while weakening Ukraine’s position at the bargaining table.

According to U.S. Senator Jim Risch (R-Idaho), chairman of the Senate Foreign Relations Committee: “Projects such as the Nord Stream 2 pipeline are a threat to European energy security and a provocation by the Russian government. Imposing sanctions that will prevent the completion of the Nord Stream 2 pipeline is an important tool to counter Russia’s malign influence and to protect the integrity of Europe’s energy sector. Passage of this legislation has been a major priority of mine over the last 12 months, and I am pleased to have secured its passage in the final NDAA. I am glad this year’s NDAA includes these widely supported sanctions, and I hope all parties involved will realize that stopping this project is in the best interest of our friends and allies who wish to curb Putin’s efforts to make Europe reliant on Russian energy.”

US #sanctions against #NordStream2 reinforce Ukraine’s position in trilateral gas talks. Upcoming sanctions helped to have Russia negotiate. The only way to guarantee whatever promises the Russian side gives us now is to ensure Nord Stream 2 is not built #StrongerTogether https://t.co/0Y8O0vthEZ

German Chancellor Angela Merkel, however, said the Vienna agreement was a “good and important signal to guarantee the security of our European gas supply.”

According to German newspaper Die Welt, Merkel has stated that the Nord Stream pipelines “under no circumstances make us dependent on Russia alone,” and that the intention is for Germany to “diversify” its gas supply with the construction of new liquid natural gas (LNG) ports and facilities, which could be served, for example, by U.S. or Qatari ships.

According to Die Welt, however, Eastern European states are also concerned about the plans for Nord Stream 2, as it would make Germany the main distributor of Russian gas in Western Europe, while the status of Poland and Ukraine—as transit countries for gas supplies—would be weakened.