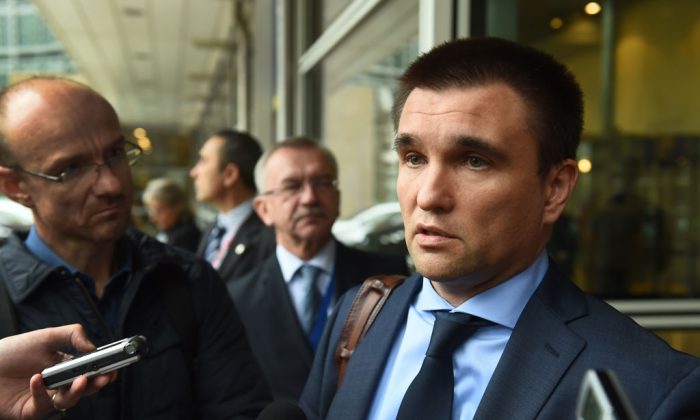 Ukraine's Foreign Minister Pavlo Klimkin makes a statement to the press outside the European Council after an informal meeting with EU and NATO officials in Brussels, on Oct. 9, 2014. (Emmanuel Dunand/AFP/Getty Images)
Crisis in Ukraine

KIEV, Ukraine—Ukraine’s parliament dropped the nation’s nonaligned status Tuesday, possibly paving the way for a bid to join NATO in defiance of the Kremlin’s wishes. Russia, meanwhile, finalized a new economic alliance with other former Soviet nations it had vainly hoped Ukraine would join.

The parallel moves reflected new divisions in Europe as Russia-West ties have plummeted to their lowest point since Cold War times over the Ukrainian crisis.

The parliament in Kiev passed the bill to drop the nonaligned status in a 303-9 vote, with supporters saying it was justified by Russian aggression toward Ukraine, including the annexation of its Crimean Peninsula in March and Russian support for a separatist insurgency in eastern Ukraine, where some 4,700 people have been killed since the spring.

But opponents said it will only increase tensions, and Moscow echoed that view.

“This is counterproductive, it only heats up the confrontation, creating the illusion that accepting such a law is the road to regulating the deep internal crisis in Ukraine,” said Russian Foreign Minister Sergey Lavrov.

The move doesn’t mean that Ukraine will apply to join NATO. But Ukrainian Foreign Minister Pavlo Klimkin told the parliament the law opens up new mechanisms “in the conditions of the current aggression against Ukraine.”

Ukraine’s prospects for NATO membership in the near term appear dim. With its long-underfunded military suffering from the war with the separatists and the country’s economy in peril, Ukraine has much to overcome to achieve the stability that the alliance seeks in members.

An alliance official, who spoke on condition of anonymity in keeping with NATO practice, told The Associated Press “our door is open and Ukraine will become a member of NATO if it so requests and fulfils the standards and adheres to the necessary principles.”

Although Ukraine had pursued NATO membership several years ago, it declared itself a non-bloc country after Russia-friendly Viktor Yanukovych became president in 2010. Yanukovych was driven from power in February after months of street protests that exploded into violence, and was replaced with Western-leaning Petro Poroshenko in May.

The Kremlin had sought to persuade Ukraine to join the Eurasian Economic Union, an alliance which Russian President Vladimir Putin finalized Tuesday at a meeting with four other ex-Soviet leaders.

The grouping, which includes Russia, Belarus, Kazakhstan, Armenia and Kyrgyzstan, comes to existence on Jan. 1. In addition to free trade, it’s to coordinate the members’ financial systems and regulate their industrial and agricultural policies along with labor markets and transportation networks.

The new alliance immediately showed signs of fracture as the leader of Belarus sharply criticized Moscow for damaging his country’s economic interests, breaking the ceremonial veneer.

Belarus, sandwiched between Russia and European Union members Poland and Lithuania, has profited handsomely from Moscow’s ban on imports of EU food in retaliation to Western sanctions against Russia by boosting imports of food from EU nations and reselling it to Russia.

The Russian authorities have retaliated by halting imports of Belarus’ own milk and meat, citing alleged sanitary reasons, and banning transit of Belarusian food bound for Kazakhstan through its territory on suspicion that much of it ended up in Russia.

“In violation of all international norms, we have faced a ban on transit,” Lukashenko said. “It was done in a unilateral way and without any consultations.”

The somber-looking Putin sat next to Lukashenko as he launched the attack, and tried to joke to get over an awkward moment. Amid the Ukrainian crisis, Russia can’t afford losing Belarus, a major political and military ally. Lukashenko also knows that Russia needs him as the host of Ukrainian peace talks.

Negotiators from Ukraine, Russia, the Organization for Security and Cooperation in Europe and the eastern rebels are to meet Wednesday in the Belarusian capital Minsk for another round of talks on resolving the Ukraine crisis.

Since a cease-fire agreement was reached in Minsk on Sept. 5, fighting has diminished. But both sides have reported frequent cease-fire violations and failed to agree on a separation line that would allow for the creation of a buffer zone and for the warring forces to pull back heavy weaponry.

Another meeting of the so-called “Contact Group” in Minsk has been set for Friday, indicating no significant decisions are expected at the Wednesday session.

Heidi Tagliavini of Switzerland, the OSCE’s lead figure at the talks, said the participants would discuss how to solidify the cease-fire, the pullback of heavy weaponry, a complete exchange of prisoners taken by both sides in the conflict and the delivery of humanitarian aid.

The divisive issue of determining a final status for the separatist regions is far from resolved. The rebels had sought absorption into Russia, but Moscow has fended off that request, instead urging the Kiev government to give broad rights to its regions in an apparent bid to use the east as a lever to prevent Ukraine from joining NATO.

Russia routinely characterizes the Ukrainian crisis as an internal matter and rejects claims from Ukraine and the West that it has sent troops and equipment to rebels in eastern Ukraine and shelled government positions from Russian border areas.

Russia’s envoy to NATO, Alexander Grushko, told the Interfax news agency that the Ukrainian vote creates “serious complications in the search for a way to end the violence and change the situation into a political process.”

From The Associated Press. John-Thor Dahlburg in Brussels and Vladimir Isachenkov in Moscow contributed to this story.